Leiomyomas are the most common benign tumor of the oesophagus. symptomatic patients are candidates for excision, we have discussed a case report of a 43-year-old male patient who had complains of progressive dysphagia. Imaging studies suggested a distal oesophageal mass with calcific foci. The tumor was enucleated laparoscopically with an operative time of 160 minutes. The patient was gradually started on oral feeds from the 3rd postoperative day after an upper gastrointestinal contrast study. The patient was discharged on the 5th postoperative day. We found this minimally invasive approach to be effective with a shorter hospital stay and a faster recovery as compared to a thoraco abdominal approach.

Leiomyomas are the most common benign tumours of the oesophagus; however, they comprise of 1% to 4% of all oesophageal tumours.1,2 Most leiomyomas are found to originate from the inner circular muscle layer of the distal oesophagus (60% of cases) with maximum incidence found amongst middle aged male.3–6 Tumours larger than 10 cm are called Giant Leiomyomas and may be single or multiple.7,8 Leiomyomas are often misdiagnosed as mediastinal mass, oesophageal cancer and gastrointestinal stromal tumour (GIST). Preoperative diagnosis is aided with imaging studies like computed tomography (CT), upper gastrointestinal endoscopy (UGIE), and endoscopic ultrasound (EUS).

A 43-year-old male patient presented with progressive painless dysphagia for 3 months with 5 kg weight loss. He has a history of hypertension, type II diabetes mellitus and poliomyelitis affecting the right lower limb. The physical examination and blood investigations were normal. A CT abdomen with oral and intra-venous contrast suggested an exophytic, lobulated soft tissue mass (10 cm × 6 cm × 4 cm) arising from the right lateral wall of distal supra-diaphragmatic oesophagus, foci of calcifications. The preoperative EUS was suggestive of a large mass with heterogenous echogenicity, cystic spaces and patches of calcifications, arising from the layer 4 of the distal oesophagus. The UGIE was suggestive of intra-luminal bulge seen over the posterior wall of the oesophagus. EUS guided needle biopsy was done. Histopathological examination revealed tumour cells expressing smooth muscle actin and Desmin. Specimen was found to be immunonegative for DOG-1, C-kit, S-100 protein and CD34. He had one episode of upper gastrointestinal bleeding which required admission and blood transfusion. He underwent a laparoscopic excision of the leiomyoma. Total intraoperative time was 160 minutes and blood loss were 50 mL. The patient was gradually started on oral feeds from the 3rd postoperative day after an upper gastrointestinal contrast study and discharged on postoperative day 5 (Fig. 1–3). 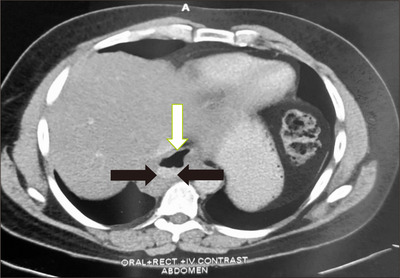 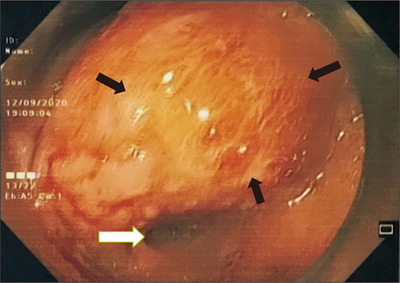 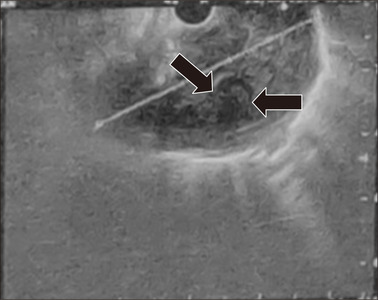 Patient was placed in split leg position with the surgeon in between the legs and the monitor at the head end of the patient. A 10 mm viewing port was placed 2/3rd–1/3rd between the umbilicus and xiphisternum. A 5-mm Nathanson’s retractor was used to retract the liver, 10 mm working port in the left sub-coastal region along the mid-clavicular line, one 5 mm port in the right sub-coastal region along the left mid-clavicular line with another 5 mm retracting port along the left anterior axillary line at the level of the umbilicus.

Following removal of the tumour, there was no evidence of oesophageal perforation/mucosal damage. The oesophageal muscle fibers were approximated with 2-0 vicryl. Cruroplasty was done with 2-0 silk. The gastric fundus was mobilized via the retro-oesophageal window and fashioned into a Toupets fundoplication wrap to cover the area of oesophageal muscle fiber disruption using 2-0 silk and the crus was fixed to the right crus Intra-operative UGIE was performed and leak test was done to check for any signs of perforation. Ryles tube was then inserted with the tip distal to the point of oesophageal repair, was confirmed. The specimen was delivered out via an endobag, removed via a McBurneys. Postoperative course was uneventful. On the postoperative day 3, a CT abdomen and chest with oral contrast was done, which was normal. The patient was started on oral feeds from the postoperative day 3 and the patient was discharged on the postoperative day 5 (Fig. 4–6). 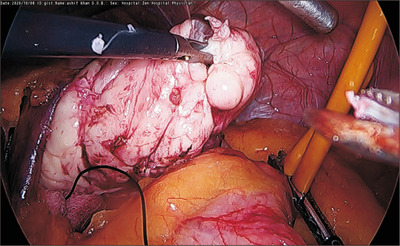 Figure 4. The leiomyoma being mobilized intra-abdominally from its intra-thoracic position. 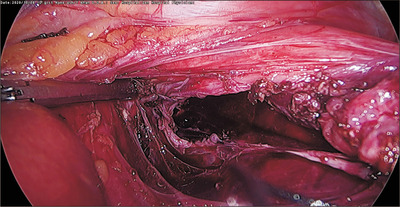 Figure 5. After removal of tumour with no evidence of oesophageal perforation/mucosal damage. 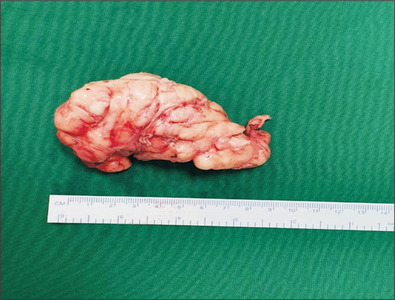 Most leiomyomas are found to originate from the inner circular muscle layer of the distal (60% of cases) and mid thoracic (30% of cases) oesophagus, particularly at the gastroesophageal junction3–5 with maximum incidence found amongst middle aged male.5,6 These tumours usually at the time of diagnosis measure less than 5 cm but if they are larger than 10 cm, they are called giant leiomyomas and may be single or multiple.7,8

Most patients with oesophageal leiomyomas are detected incidentally, however when they attain bigger size, they can cause symptoms like dysphagia, regurgitation, weight loss and chest pain.10,15

Factors such as tumour size of more than 4 to 5 cm, presence of symptoms, location of the tumour, mucosal ulcerations and if malignancy cannot be ruled out, are considered as indications for surgical intervention whereas asymptomatic lesions and lesions < 4 to 5 cm in size can be managed conservatively with regular follow-up UGIE and contrast studies.10,16

A proposed algorithm for management has been mentioned below (Fig. 7).15

Even Giant intra-thoracic/distal oesophageal leiomyomas can be successfully enucleated laparoscopically with crural division, if necessary, to gain access to the mass. Thoracotomy and video-assisted thoracoscopic surgery (VATS) are other approaches to such tumours, but they are associated with possibilities of mediastinitis (which is often more difficult to manage when compared to peritonitis), damage to surrounding vital structures, apart from placement of chest drains and anesthesia concerns of ventilation, with a higher incidence of complications with thoracotomy and slower postoperative recovery of patient. The Laparoscopic approach is associated with the negligible possibility of mediastinitis (as the site of myotomy is located intra-abdominally and fixed to the crura with fundoplication acting as another layer of protection), Chest tube placements, anesthesia concerns and respiratory complications, thus was found to be associated with lesser post-operative morbidity as compared to VATS approach especially with the additions of intra-operative UGIE, leak test, serosal patch repair and Toupet’s fundoplication for safety and prevention of future reflux symptoms.

In conclusion, traditionally large, intra-thoracic/distal oesophageal leiomyomas were dealt with an open/thoracotomy approach or VATS, which was associated with significant postoperative morbidity and a high potential of mediastinitis.11,17 Laparoscopic approach is found to be associated with lesser morbidity, better precision and opportunity to preserve the oesophageal muscle fibers so that they can be to cover areas of mucosal injuries/perforation (if any) which itself is the most common intra operative and postoperative complication of enucleation of oesophageal leiomyomas.1,10 We have found this minimally invasive approach to be an effective and well-tolerated treatment option in the hands of an experienced surgical team. Insertion of a nasojejunal tube may be done in case of suspected oesophageal injuries so that patient can be safely started on enteral nutrition at the earliest.