Summary of event: Endoscopic ultrasound-guided choledochoduodenostomy (EUS-CD) with the placement of a fully covered self-expandable metal stent (SEMS) is an alternative method to percutaneous transhepatic biliary drainage in cases of failed endoscopic retrograde cholangiopancreatography (ERCP) for malignant distal biliary obstruction. We report the case of a 64-year-old female who underwent EUS-CD with placement of a fully covered SEMS for obstructive jaundice due to distal bile duct obstruction by a pancreatic head mass and failed ERCP. Five months after the procedure, she presented with spontaneous expulsion of the stent in vomitus. She did not have bile leak and jaundice due to the formation of an epithelialized fistulous tract between the bile duct and duodenum (choledocho-duodenal fistula).
Teaching point: Delayed distal migration of a fully covered SEMS after EUS-CD can occur. The formation of an epithelialized choledochoduodenal fistula prevented the occurrence of bile leak, pneumoperitoneum and perforation. Re-stenting through the same tract is possible. Stents with antimigration flanges or lumen-apposing metal stents may prevent migration.

A 64-year-old female patient who presented with obstructive jaundice was diagnosed with borderline resectable pancreatic cancer. She was planned for endoscopic retrograde cholangiopancreatography and self-expandable metal stent placement (SEMS) placement to relieve biliary obstruction. On duodenoscopy, she was found to have duodenal infiltration precluding passage of the duodenoscope up to the major duodenal papilla. Hence she was planned for endoscopic ultrasound-guided choledochoduodenostomy (EUS-CD) with placement of a fully covered SEMS. Endoscopic ultrasonography (EUS) was performed by a curvilinear array ultrasound gastro-videoscope (GF UCT-180; Olympus Medical System, Tokyo, Japan) and the common bile duct was focused from the first part of the duodenum. It was punctured a 19-G EUS aspiration needle (19G Expect Needle; Boston Scientific, Marlborough, MA, USA) under EUS guidance. Bile was aspirated and a cholangiogram was taken, which showed a dilated common bile duct with a cut-off at the distal end and moderate intrahepatic biliary radical dilatation. Using a 6-Fr cystotome (ENDO-FLEX, Rohrdorf, Germany), a tract was created between bile duct and duodenum, which was dilated by an 8.5-Fr Sohendra biliary dilation catheter (Cook Medical, Bloomington, IN, USA). A fully covered SEMS measuring 4 cm in length and 10 mm in diameter (Wall Flex; Boston Scientific) was placed across the fistula (Fig. 1). Her serum bilirubin level normalized over 3 weeks. After neo-adjuvant chemoradiation therapy, she had disease progression and developed liver and retroperitoneal lymph node metastasis. She was considered for palliative care only in accordance with a multidisciplinary team discussion. Five months after EUS-CD, she presented with spontaneous expulsion of the SEMS in vomitus (Fig. 2). She did not have jaundice, features of biliary peritonitis, or perforation. Esophagogastroduodenoscopy revealed duodenal opening of the choledocho-duodenal fistula in first part of duodenum draining bile into the duodenum and luminal stenosis at the D1-D2 junction due to tumor infiltration (Fig. 3). Contrast-enhanced computed tomography showed a fistula between the bile duct and duodenum (Fig. 4). There was no evidence of free fluid, localized collection, fat stranding, or pneumoperitoneum. We advised fully covered SEMS placement through the fistulous tract to maintain its patency and duodenal SEMS placement for duodenal obstruction but the patient was not willing to undergo that procedure. She succumbed to illness after 2 months, during which she did not develop recurrent jaundice. 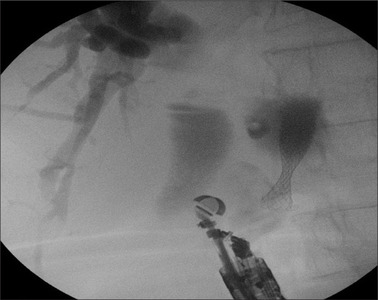 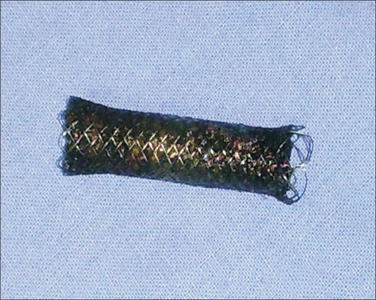 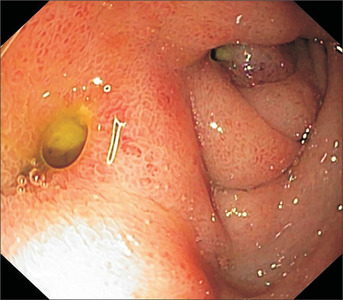 Figure 3. Endoscopic image showing duodenal opening of a choledochoduodenal fistula in the first part of the duodenum and duodenal obstruction due to cancer infiltration. 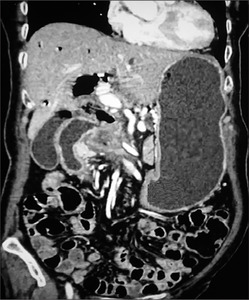 A long-term follow-up series reported distal migration of fully covered SEMS after EUS-guided biliary drainage, which was treated with re-stenting through a fistula or transpapillary approach.1,2 The median time to stent migration was 87 days (range, 11–229 days).2 In our case, migration occurred 152 days after the procedure; the stent migrated in the upper gastrointestinal tract and was expelled in vomitus, possibly due to antiperistalsis during vomiting and luminal narrowing at the D1-D2 junction, preventing its passage into the distal gastrointestinal tract. Furthermore, since it happened late after the procedure, allowing the formation of a maturecholedochoduodenal fistula, the patient did not develop obstructive jaundice, bile leak, or perforation peritonitis.

Distal stent migration after EUS-CD can be prevented with the use of fully covered stents with antimigration flanges on both ends or the use of double pigtail stents placed to anchor the existing SEMS.3 Lumen-apposing metal stents (LAMS) are small dumbbell-shaped covered metal stents with large flanges to allow anchoring across non-adherent structures and prevent stent migration.3 In a series by Kunda et al4 (N-57) and Jacques et al5 (N-52) using LAMS for EUS-CD, success rates of 98.2% and 88.5% were reported with a single case of stent migration in each series.

Delayed distal migration of fully covered SEMS after EUS-CD can occur. The formation of an epithelialized choledochoduodenal fistula prevented the occurrence of bile leak, pneumoperitoneum, and perforation. Restenting through the same tract is possible to keep the lumen of the tract patent. Stents with antimigration flanges or LAMS may prevent migration.