Iatrogenic air embolism is a rare and potentially fatal complication of gastrointestinal endoscopy. We present a 66-year-old male patient who developed cerebral arterial gas embolism shortly after therapeutic endoscopic retrograde cholangiopancreatography (ERCP) for acute biliary pancreatitis, which is the first case reported in Hong Kong according to latest literature search. Some risk factors of iatrogenic air embolism in this patient include cholangitis with intraductal stones, sphincterotomy and bleeding at papillotomy site which required haemostasis with balloon tamponade. Early diagnosis and timely treatment with hyperbaric oxygen therapy resulted in full neurological recovery of our patient.

Cerebral arterial gas embolism (CAGE) is a rare and potentially fatal complication of (ERCP).1 Cases of air embolism have been reported following gastrointestinal endoscopy, while most described cases have been related to ERCP.2 There have been totally 51 cases of ERCP-related air embolism reported from 1988 to 2017.2 We report the first case of CAGE after therapeutic ERCP for biliary pancreatitis in Hong Kong.

A 66-year-old male patient with a past medical history of acute pancreatitis and known juxta-papillary diverticulum presented with epigastric pain for 2 weeks and fever during admission. He presented with signs and symptoms as described in the Charcot’s triad, with liver function test showing a cholestatic picture with an elevated serum amylase diagnostic of acute pancreatitis. Urgent computerized tomography with contrast of abdomen and pelvis was performed which showed ductal stone at the lower end of dilated common bile duct (CBD), dilated intrahepatic ducts (IHDs), distended gallbladder with gallstones inside and peripancreatic fluid with a normal-sized pancreatic duct (Fig. 1). The subject has given their written informed consent to publish this case. 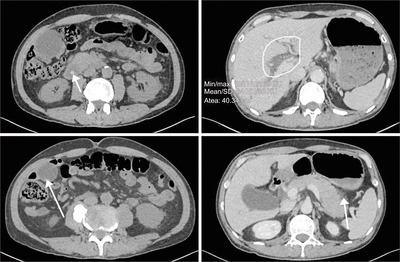 ERCP was performed in view of biliary pancreatitis with concomitant acute cholangitis. ERCP findings included a juxta-papillary diverticulum, a pendulous and swollen papilla at 4 O’clock position, grossly dilated CBD and IHDs with turbid bile and sludge inside. Selective CBD cannulation with catheter and guidewire was performed, followed by full wire-guided papillotomy with CleverCut papillotome (Olympus, Hong Kong) (Fig. 2). Patient’s vital signs were stable during the ERCP, with eventual ductal clearance achieved and confirmed by occlusive cholangiography after irrigating and trawling both IHDs and CBD (Fig. 3). Haemostasis of papillotomy site was achieved with balloon tamponade. The endoscope was withdrawn after decompression. During the procedure, 3 mg of Midazolam, 50 µg of Fentanyl and 40 mg of Buscopan were injected intravenous in total. Room air was used for insufflation. The total ERCP procedural time is around 20 minutes. 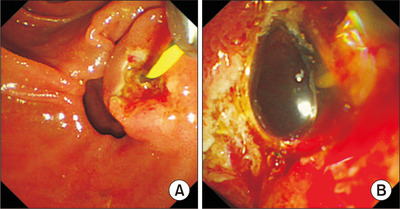 Figure 2. Endoscopic findings: a juxta-papillary diverticulum and a pendulous and swollen papilla at 4 O’clock position (A); turbid bile and sludge inside (B). 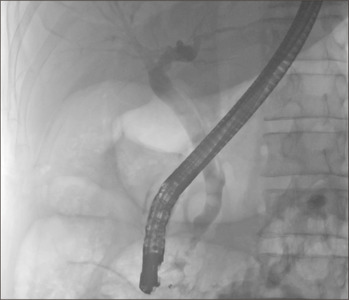 He was noted to have reduced consciousness with Glasgow Coma Scale 14/15 (E3V5M6) and a sudden onset of left hemiplegia 24 minutes after ERCP, although bilateral pupil and extraocular movement were intact and no facial asymmetry nor dysarthria was noted. Plain computed tomography of brain (CTB) was performed in view of suspected stroke, which showed right CAGE (Fig. 4). 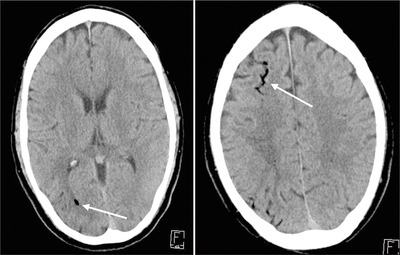 High-flow oxygen supplement was immediately given to the patient, while stroke team was consulted, with a joint decision of commencing hyperbaric oxygen therapy (HBOT). The patient was then transferred to the HBOT unit in Pamela Youde Nethersole Eastern Hospital (PYNEH) for definitive treatment within a few hours. Upon arrival of PYNEH, his left upper limb (UL) and lower limb (LL) power were 2/5 and 3/5 on the Medical Research Council muscle scale (MRC muscle scale) respectively.

He received in total 2 sessions of HBOT. After the 1st session which was performed 282 minutes after the onset of CAGE, his left UL and LL MRC power increased to 4/5 and 5/5 on MRC muscle scale. He developed seizure afterwards and was sedated with midazolam and intubated for airway protection. The patient’s seizure was under control. His neurology fully recovered and was extubated after he received the 2nd session of HBOT around 20 hours later. Radiologically, it was found that the arterial gas showed in CTB was absorbed (Fig. 5). 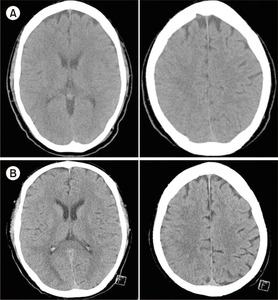 Figure 5. Plain computed tomography of brain performed after the 1st session (A) and 2 days after the 2nd session (B) of hyperbaric oxygen therapy respectively. Note that the previous arterial gas was absorbed.

Transthoracic echocardiogram and transcranial Doppler bubble test were performed later in view of paradoxical embolism, which showed no patent foramen ovale and no cardiac shunting.

The mortality of air embolism after ERCP is around a half among the 51 cases reported in literatures.2 It is postulated that in most iatrogenic air embolism case, air enters the venous circulation from the biliary ductal system. The patho-mechanisms include (1) mechanical irritation of the bile duct wall allowing air to enter portal or hepatic veins; (2) preexisting bilio-venous fistula; (3) air entering into hepatic veins directly during intra-ductal endoscopy or under high pressure; (4) duodeno-biliary fistula.3 The presence of arterial gas is believed to be, in most cases, from the venous circulation via a right-to-left shunt such as patent foramen ovale, atrial septal defect or intra-pulmonary shunts, or via pulmonary veins into the left atrium. This is known as paradoxical embolism.2,3

Concerning our patient, possible risks factors which possibly contributed to the CAGE include cholangitis with intraductal stones, sphincterotomy, and bleeding at papillotomy site which required haemostasis with balloon tamponade. Other possible causes of paradoxical embolism were investigated with transthoracic echocardiogram and transcranial Doppler bubble test which were both negative. We needed to see the result of transesophageal echocardiogram to rule out any cardiac shunt.

The first step to manage CAGE is early recognition. Concerning the present patient, he presented with contralateral hemiplegia and reduced consciousness, which mimicked the presentation of various medical neurological emergencies ranging from intra-cranial pathologies such as thromboembolic event and intracranial hemorrhage, to systemic disorders such as metabolic disorders. Therefore, one should have a high index of suspicion and recognize those patients with risk factors in order to make an accurate diagnosis.

The treatment options of CAGE include supportive and definitive ones.3 High flow oxygen reduces the volume of intra-arterial gas. Repositioning the patient to supine position prevents further air emboli from migrating to cerebral circulation. HBOT is a definitive treatment recommended in severe cases of CAGE with hemodynamic compromise and neurologic deficits.7 HBOT is defined by the Undersea and Hyperbaric Medical Society as breathing near 100% oxygen intermittently inside a hyperbaric chamber pressurized to equal or greater than 1.4 atmosphere absolute for clinical purposes such as air embolism, carbon monoxide poisoning, decompression sickness. Its contraindication includes respiratory diseases like chronic obstructive lung disease, asthma and pneumothorax and other diseases including chronic sinusitis, previous history of ear surgery, optic neuritis, epilepsy, pregnancy, claustrophobia and unstable emotion. Through a hyperbaric environment, HBOT is effective in increasing oxygen delivery and, according to Boyle’s law which state that the volume of nitrogen bubble in circulation is inversely proportional to the pressure exerted upon it, reducing the volume of gas bubbles in the circulation. Although the ideal timing to initiate HBOT is unclear, two studies showed that patients who received HBOT within 5 hours8 and 6 hours9 from the onset of symptoms respectively have better recovery. It is noted that concerning the present patient, he received HBOT 282 minutes after the onset of left hemiplegia, resulting in full neurological recovery. Both of these studies and our case highlight the importance of early HBOT for better neurological recovery.

Some of the prophylactic measures are suggested.3 Pre-endoscopically, appropriate indications and presence of risks factors must be checked. Peri-endoscopically, use of carbon dioxide for insufflation was advocated as it is rapidly absorbed into the intestinal mucosa and thus reduces residual gas volume.10 For patients with known risks factors or patent foramen ovale, endotracheal intubation and capnography monitoring can allow early recognition of air embolism3 while central venous catheter placement when needed may prevent the complications from venous air embolism.

In conclusion, CAGE is a rare and potentially fatal complication of ERCP. Its presentation mimics various medical emergencies. Prophylactic measures and identifying potential risk factors as well as early detection are crucial to prevent its occurrence. While treatment is largely supportive, timely definitive treatment with HBOT should be considered especially for those with hemodynamic compromise and neurological deficit, which enables satisfactory or even full neurological recovery.

We acknowledge the contribution of our colleagues at Yan Chai Hospital and Pamela Youde Nethersole Eastern Hospital.