Malignant biliary obstruction is commonly associated with gastric outlet obstruction in advanced pancreaticobiliary malignancies. Simultaneous placement of biliary and gastro-duodenal self-expanding metal stents (SEMS) for palliation has been reported previously. Rarely colonic obstruction can occur in patients with advanced carcinoma of the gall bladder, which is amenable to therapy using colonic SEMS. We report a rare case of simultaneous endoscopic palliative SEMS placement for biliary, duodenal and colonic obstruction in a patient with advanced carcinoma of the gall bladder. This case report conforms to the Declaration of Helsinki and written consent was taken from the patient for publication. 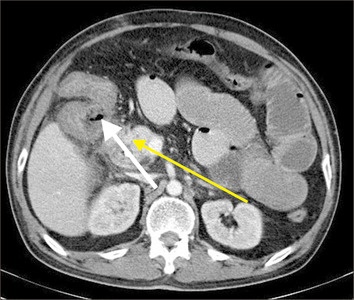 Colonoscopy showed an ulceroinfiltrative lesion at hepatic flexure with luminal narrowing. WallFlex Colonic SEMS (25 mm × 90 mm; Boston-Scientific, Marlborough, MA, USA) was placed across the stricture (Fig. 2). On attempted passage of side-view duodenoscope on the day after colonic stent placement and relief of colonic obstruction, there was type I malignant bilio-duodenal stenosis. Scope was negotiated across with difficulty. Free cannulation of the bile duct was achieved and cholangiogram showed 2 cm proximal CBD stricture. WallStent SEMS (10 mm × 80 mm; Boston-Scientific) was placed across the stricture (Fig. 3). Patient then reported symptoms of Gastric Outlet Obstruction with persistent vomiting for 2 days. WallFlex SEMS (22 mm × 90 mm; Boston-Scientific) was placed across the duodenal luminal narrowing two days after biliary stenting (Fig. 4, 5). Subsequent CT scan at 1 month after stent placement, showed patent stents with mass in the gall bladder fossa (Fig. 6). There was complete relief of symptoms of gastric outlet obstruction (GOO) and intestinal obstruction. The patient received palliative chemotherapy with Capecitabine with Oxaliplatin for 8 cycles. The patient did not have any further episodes of gastric outlet, intestinal or biliary obstruction over 8 months of follow up after stent placement, after which he succumbed to neutropenic sepsis with progressive disease. 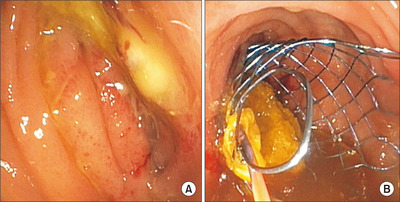 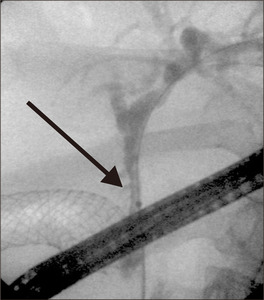 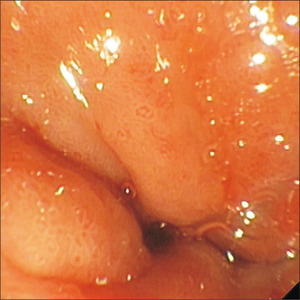 Colonic infiltration with development of cholecystocolic fistula with colonic obstruction is a rare occurrence in gall bladder malignancies, described in few case reports.7 Technical success of colonic SEMS placement in patients with obstruction secondary to extra-colonic malignancies is lesser than in colonic malignancies.8 Although SEMS are not recommended as the primary therapeutic modality for proximal colonic obstruction, they remain a viable alternative to surgery. Our patient had technically and functionally successful SEMS placement, thus obviating the need for a stoma and leading to an improved quality of life.

Concomitant endoscopic stent placement for biliary, duodenal and colonic obstruction has been described in only one case report.9 Complications like tumour ingrowth or over growth occur in up to 15% patients with biliary, gastroduodenal and colonic SEMS in situ. Migration is more common with covered rather than uncovered SEMS.10,11 Our patient did not have any further episodes of luminal or biliary obstruction after SEMS placement. The technical challenges in this case were the need for colonic stent placement in a patient with proximal obstruction of the colon due to an extracolonic pathology. Also relief of distal obstruction was foremost, followed by stenting for proximal obstruction. This case adds to the limited available literature on endoscopic triple stent placement in advanced hepato-pancreatico-biliary malignancies, with favourable results.