Use of metallic stents in the management of stenotic bowel stomas

Bowel stoma stenosis resulting in bowel obstruction can be managed conservatively by dietary changes, or by surgical revision of the stenotic/retracted stoma. Metallic stent placement is a minimally invasive procedure that can help alleviate symptoms and obviate the need for surgical interventions, especially in non-surgical candidates or patients with progressive malignant obstruction. This report demonstrates the use of image-guided metallic stent placement in patients with stenotic stomas due to different underlying pathologies.

As with many surgical procedures, bowel stomas (colostomy/ileostomy) often present with stenoses causing outflow problems and upstream bowel obstruction. The aetiology of the stenoses can be either benign (secondary to ischaemia and fibrosis) or due to progressive malignant disease.

A 65-year-old male patient with a past medical history of type 2 diabetes mellitus, hypertension, atrial fibrillation, and heart failure (ejection fraction 20%–30%) presented with a low-output ileostomy 4 weeks after bowel resection due to bowel ischaemia secondary to superior mesenteric artery and superior mesenteric vein thrombosis. The patient was found to have a retracted stenotic stoma, and was deemed not to be surgical candidate for revision due to his multiple co-morbidities and present surgical performance status. He was referred to the interventional radiology (IR) department for further management.

The ileostomy was cannulated, confirming the presence of stomal retraction and stenosis (Fig. 1A). A 20 mm × 100 mm double-covered colonic stent (EGIS; S&G Biotech, Yongin, Korea) was deployed (Fig. 1B) with a 1-cm lip of the stent protruding through the stoma. The stent was sutured to the skin with 2-0 Prolene sutures (Fig. 1C). Following the procedure, the small bowel obstruction completely resolved, and the stent remained patent till the last follow-up at 7 months without any symptomatic recurrence of bowel obstruction.

A 91-year-old female patient with type 2 diabetes mellitus, hypertension, and infective endocarditis presented with ischemic colitis involving the splenic flexure, descending colon, and sigmoid colon. This was managed with colectomy and colostomy of the ascending colon. Five months later, the patient developed low output from the stoma with abdominal pain.

On clinical examination, the colostomy was severely stenotic and almost totally occluded. Due to the patient’s multiple co-morbidities and performance status, the patient was referred to IR for consideration of stent placement.

Contrast evaluation of the stoma showed a 4 cm stenotic segment (Fig. 2A). A 28 mm × 80 mm double-covered colonic stent (EGIS; S&G Biotech) was deployed, allowing for a 1-cm lip of the stent protruding through the stoma. The stent was then sutured to the skin with 2-0 Prolene sutures. The large bowel obstruction decompressed immediately. 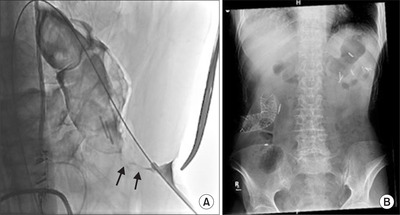 Figure 2. (A) Lateral fluoroscopic image showing the retracted stenotic stoma (arrows). (B) Frontal radiograph showing the stent in the stoma with no radiographic signs of bowel obstruction.

Two days post-procedure, the stent dislodged and was expelled from the stoma. A new 26 mm × 120 mm covered colonic stent (EGIS; S&G Biotech) was deployed with a “lip” protruding through the stoma. The stent was once again sutured to the skin with 2-0 Prolene sutures.

The stent remained patent until the last follow-up at 2 months, with no signs of bowel obstruction (Fig. 2B).

A 57-year-old male patient with known alcoholic liver disease presented with a strangulated umbilical hernia. A laparotomy was performed, ischaemic portions of both the small and large bowel were resected, and a right-sided colostomy was formed. Following surgery, faecal fistulation caused some breakdown of the wound, leading to another laparotomy. The patient was managed conservatively and was placed on parenteral nutrition.

Three months later the patient developed a hematoma in the right iliac fossa, which was also managed conservatively. During this period, the colostomy retracted and developed a stenosis with large bowel obstruction. The stoma was only able to accommodate a 12-Fr Foley catheter.

Under fluoroscopic guidance, the stoma was cannulated and a fully covered 14 mm × 20 mm lumen apposing metal stent (LAMS) (NAGI; Taewoong, Gimpo, Korea) was inserted (Fig. 3A). The stent was dilated with a 14-mm balloon (Atlas; Merit Medical, South Jordan, UT, USA). The large bowel obstruction resolved, and no additional procedures or surgery was required (Fig. 3B). The stent remained in position at 18 months and the stoma still functioned well. 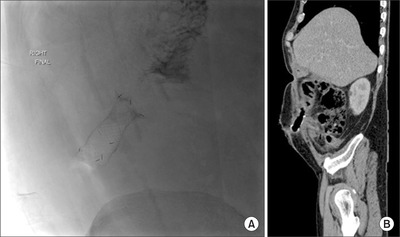 Figure 3. (A) Fluoroscopic image after deployment of a 14 mm × 20 mm covered stent. (B) Sagittal computed tomography image 1 month after stent insertion showing the stent within the stoma with no signs of bowel obstruction.

Computed tomography and endoscopic findings suggested a single point of obstruction 5 cm proximal to the ileostomy (Fig. 4A, 4B). Under fluoroscopic guidance, a 14 mm × 20 mm LAMS (NAGI; Taewoong) was inserted and dilated with a 14-mm balloon (Atlas; Merit Medical) (Fig. 4C). No significant decompression of the dilated small bowel was seen after stent deployment (Fig. 4D). No subsequent clinical improvement was seen and the cause of the obstruction was felt to be from multiple peritoneal adhesions rather than a single point. Despite the persisting obstruction, the patient was still alive 5 weeks post-stenting.

Patients who have bowel stomas often have multiple co-morbidities that make them high-risk candidates for repeat surgery. In addition, repeat surgery can be difficult secondary to previous surgical scarring, and can additionally cause further scarring, leading to worsening stenosis. The cases above demonstrate how IR should be considered as a minimally invasive option in treating stomal stenoses without having to resort to challenging surgery.1,2 An alternative approach is the use of trans-colostomy button gastrostomy tubes for the management of malignant bowel obstruction in patients with peritoneal carcinomatosis.3

A covered stent was selected in all cases. The diameter of the stent ranged from 14 to 26 mm with a length range of 20 to 120 mm. In two cases, the stent was secured with suture material, although this did not prevent migration in one case. A larger series might help to determine the optimal size for the stent and whether anchoring the stent is required.

Three patients experienced immediate clinical benefits with the resolution of bowel obstruction. Case 4 did not experience any clinical improvement; the obstruction was due to widespread peritoneal disease rather than a single level as was thought initially. This highlights the importance of patient selection when considering stoma stenting.

In summary, stoma stenting is a simple and quick procedure that can be performed under local anaesthesia or minimal sedation, and can relieve bowel obstruction in a minimally invasive manner without the need for repeat surgery.