Plummer–Vinson syndrome is known as the association of dysphagia, upper esophageal web, weight loss, and iron-deficiency anemia. Esophageal dilation therapy is usually necessary to remove webs and to relieve dysphagia in order to encourage oral intake. We report two cases of Plummer–Vinson syndrome. Both patients presented with significant and longstanding dysphagia, sideropenia, and painful swallowing. Patients’ esophagograms revealed the presence of tight stenosis in the high cervical esophagus. Both patients were treated with fluoroscopically guided balloon dilation and iron supplementation. These patients were followed up after the initial treatment and showed improvement of dysphagia and iron-deficiency anemia.

Plummer–Vinson syndrome, also known as the Paterson–Brown-Kelly syndrome, is a rare disease characterized by difficult swallowing, iron-deficiency anemia, glossitis, cheilosis, and esophageal webs.1 Treatment with iron supplementation and mechanical dilation of the esophagus generally provides an excellent outcome. Due to the extreme rarity of this syndrome the epidemiology is unknown. The reduction in the prevalence of Plummer–Vinson syndrome has been hypothesized to be the result of improvements in patient nutritional status in countries where the syndrome was previously described.1 It generally occurs in perimenopausal female. Its identification and follow-up are considered to be relevant due to the risk of squamous cell carcinomas of the esophagus.

We present the cases of two patients with significant and long-standing dysphagia and sideropenia. Both of these patients were treated with esophageal dilation therapy and iron supplementation.

The patient’s esophagogram revealed the presence of tight stenosis in the high cervical esophagus (Fig. 1A). Endoscopy showed a benign stenosis of cervical esophagus; however, it was difficult to pass this stenosis, then fluoroscopically guided balloon dilation was manually inflated for three minutes with full resolution of the stricture using a 16 mm × 60 mm balloon catheter (XXL Vascular; Boston Scientific, Galway, Ireland) over a 0.035-inch, hydrophilic stiff guide wire (Terumo, Tokyo, Japan) (Fig. 1B, 1C). The post-dilation esophagogram showed resolution of the cervical esophageal web with good contrast passage without procedure related complication (Fig. 1D). The remaining esophagus, stomach, and duodenum were normal. The patient was kept on iron supplementation therapy for four months until the hematological tests normalized (serum Fe 45 µg/dL, ferritin 22.3 ng/mL, Hb 11.3 g/dL, Ht 36%), and her complaint has resolved. Five months later the patient was determined to be in good health and she continues to be healthy and gaining weight, post treatment BMI was 19.6 kg/m2. 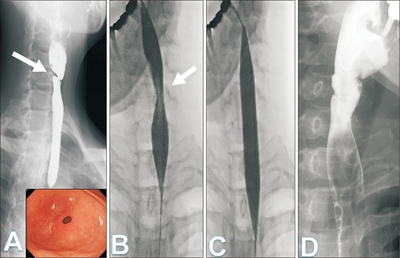 Figure 1. A 53-year-old female presented with dysphagia and swallowing pain. (A) A pre-procedure esophagogram and endoscopy (inset) revealed the presence of tight stenosis (arrow) in the high cervical esophagus. (B, C) Balloon dilation was performed using a 16-mm-diameter balloon across the stricture (arrow). (D) A post-procedural esophagogram demonstrates the improvement of the cervical esophageal stricture.

A 61-year-old female presented with long-standing symptoms of dysphasia, postprandial discomfort, loss of appetite, and chopping her food to swallow it. The pre-treatment patient’s BMI was 17.8 kg/m2. The hematological tests showed the presence of iron-deficiency anemia (serum Fe 22 µg/dL, ferritin 4.1 ng/mL, Hb 9 g/dL, Ht 29%). The patient received an oral ferrous sulfate agent, 256 mg twice daily for five weeks. An esophagogram revealed the presence of a short segment stricture in the cervical esophagus (Fig. 2A). The endoscopy was performed outside, which revealed a benign esophageal stricture. fluoroscopically guided balloon dilatation was performed using the same technique as that performed in case 1 without procedure related complication (Fig. 2B, 2C). The post-dilation esophagogram showed resolution of the cervical esophageal web with good contrast passage (Fig. 2D). The patient first symptoms have resolved and kept on an iron supplement for four months until the hematological tests normalized (serum Fe 40 µg/dL, ferritin 20 ng/mL, Hb 13.2 g/dL, Ht 40.8%). and was found to be in a good general condition two years after her diagnosis with BMI of 19.3 kg/m2. 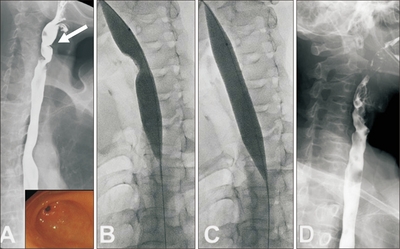 Figure 2. A 61-year-old female presented with long-standing symptoms of dysphasia, postprandial discomfort, loss of appetite, and chopping food in order to swallow it. (A) A pre-procedure esophagogram and endoscopy (inset) revealed the presence of short-segment stenosis (arrow) in the cervical esophagus. (B, C) Balloon dilation was performed using a 16-mm-diameter balloon across the stenotic area. (D) A post-procedure esophagogram shows the improvement of the cervical esophageal stricture as well as smooth passages of contrast to the distal esophagus.

Plummber–Vinson syndrome is most commonly in middle aged female, The incidence is decreasing in the developed country, perhaps due to improved nutrition and the availability of healthcare systems.2 The pathophysiology of the web formation and dysphagia in Plummer–Vinson syndrome remains unclear.3 There is a hypothesis that iron deficiency reduces the levels of iron-dependent oxidative enzymes. This reduction gradually degrades pharynx muscles and causes atrophy of the mucosa, leading to the development of a web.4 The diagnosis is based on the evidence of iron-deficiency anemia and one or more esophageal webs in patients with dysphagia. Esophageal webs can be detected by esophagography and endoscopy. They appear to be smooth and thin with eccentric or central lumen. The webs typically occur in the proximal portion of the esophagus.1,3

Since dysphagia is a main clinical feature of Plummer–Vinson syndrome, the differential diagnosis includes all other causes of dysphagia especially malignant tumors, benign strictures or esophageal rings. Other reasons for dysphagia are diverticula, motility disorders such as achalasia, spastic motility disorders, scleroderma, diabetes mellitus, gastroesophageal reflux disease, and neuromuscular and skeletal muscle disorders.1

Plummer–Vinson syndrome can be treated easily and effectively with iron supplementation and dilation therapy.1 Iron replacement therapy may significantly improve dysphagia, especially in patients with a web that is not substantially obstructive.4 If there is significant obstruction of the esophageal lumen by the esophageal web as well as persistent dysphagia, balloon dilation of the web should be performed.1 Dilation therapy can be easily performed with endoscopy or under fluoroscopy guidance.

Our patients were diagnosed with Plummer–Vinson syndrome at their first visit and for which they then underwent fluoroscopically guided balloon dilation of their esophageal stricture due to the near obstruction. After dilation, the dysphagia resolved and their iron-deficiency anemia improved using iron supplementation therapy.

In our patients, successful treatment was achieved by balloon dilation under fluoroscopic guidance as well as iron therapy. The use of fluoroscopy has advantages not limited to the identification of the proximal and distal ends of a stricture as it also allows visual control of the entire balloon catheter during its placement and inflation.5–8 The use of fluoroscopy helps to minimize the risk of perforation caused by inappropriate advancement of instruments and misplacement of the balloon during its inflation caused by its sliding and give a real-time of stricture dilation during balloon inflation in comparison to endoscopy. In bougienage dilation, there is an abrupt, shearing axial force on the stricture that often causes significant injury of the mucosa and may, therefore, lead to scars and further stricture. In balloon dilation, as there are no longitudinal shearing forces, both the diameter of the balloon and the dilation pressure can be controlled precisely. Therefore, balloon dilation can be more efficient and less likely to produce damage to a patient’s esophageal wall.9,10 However, it is important for these patients to undergo initial endoscopy in order to confirm their diagnosis and thereby exclude the presence of a possible malignancy.

We experienced that fluoroscopically guided balloon dilation was efficient and reliable for the treatment of benign esophageal strictures associated with Plummer–Vinson syndrome.