Background: Infra-colic radiologically inserted gastrostomy is not well documented, and the presence of an insertion window solely below the transverse colon is generally regarded as a contraindication to gastrostomy insertion. A perceived increased risk is due to the presence of vessels and lymphatics within the omental and peritoneal structures, such as the epiploic arteries, the arterial arcade of Barkow, and middle colic artery branches from the superior mesenteric artery. Colonic obstruction is also an additional theorised risk. We provide evidence that infra-colic insertion of a feeding tube through the greater omentum can be performed safely.
Methods: A total of 1,156 gastrostomies were inserted over an 8-year period. A retrospective review of the 5 cases was conducted. Electronic patient records were reviewed including clinical consultations, procedure reports and images.
Results: In all cases, barium was administered orally/per nasogastric tube the day before to delineate the colon. All patients underwent sedo-analgesia with insufflation of the stomach achieved by a temporising nasogastric/orogastric tube. Infra-colic gastropexy with three SafeTpexy T-fasteners was undertaken. Standard 12 Fr balloon retained tubes were inserted through the greater omentum with no post-procedural complications or tube malfunctions in four cases. A 16 Fr disc retained tube was inserted in a fifth case.
Conclusion: Despite the perceived difficulties, we suggest that infra-colic gastrostomies can be performed with confidence, and with little deviation from standard insertion techniques. They can be inserted without an apparent increase in complications, although operators need to be aware of the anatomical differences and additional structures traversed when performing infra-colic gastrostomies.

Gastrostomy, first described endoscopically in 19801 and fluoroscopically in 19812 has become a widely accepted, safe and technically successful method for nutritional support. Main indications are neurogenic dysphagia, such as stroke and neuro-degenerative disease and mechanical dysphagia from oro-pharyngeal and oesophageal cancer.

Standard radiologically inserted gastrostomy (RIG) requires a collapsible retaining mechanism in order to advance the tube through the abdominal wall into the stomach. The most common mechanism used is an inflatable balloon within the stomach. Other devices using loop-retained catheters and deformable mechanical retainers have not proved as successful.3,4

Bumper-retained percutaneous endoscopic gastrostomy (PEG) tubes are superior to balloons in their fixation and dwell time and require much less maintenance than balloon-retained tubes.3,5 Non-endoscopic antegrade placement of PEG tubes from the mouth was described as early as 1988,6 but despite its documented success rates,7 this is still underused by radiologists.

A standard gastrostomy tube insertion passes from the skin through the abdominal wall into the stomach, avoiding the infra-colic reflections and omentum. In cases of a high-riding transverse colon draped over the stomach, the options for establishing a feeding route become limited. If the colon is identified, injury can be avoided and an infra-colic approach considered (Fig. 1, 2). Theoretically this is of greater risk due to the gastrostomy tube traversing additional structures and vessels such as the epiploic arteries and arcade of Barkow, potentially increasing the risk of bleeding (Fig. 3). We present our experience of the infra-colic approach where unconventional anatomy precludes a standard gastrostomy insertion with no adverse events or compromise of feeding tube function. 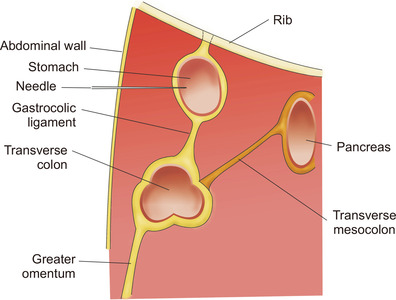 Figure 1. A standard radiologically inserted gastrostomy insertion. This would typically traverse skin, subcutaneous tissues, muscle, and two layers of peritoneum before entering the stomach (shown without gastropexy anchors for clarity). 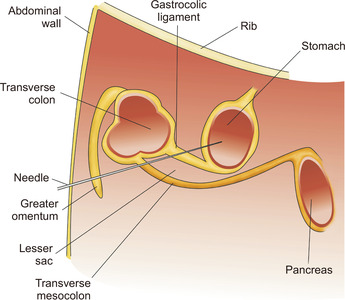 Figure 2. An infra-colic radiologically inserted gastrostomy insertion. Where the colon is high riding, the puncture may traverse the greater omentum, transverse mesocolon, and the gastro-colic ligament before entering the stomach. 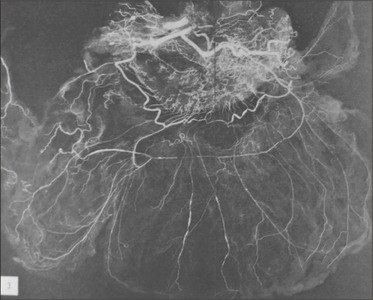 Figure 3. Vasculature of the greater omentum in a human donor, imaged via angiography with barium gelatine, demonstrates the complex vascular anatomy of the grater omentum (reprinted from “The Greater Omentum”, 1983, edited by D. Liebermann-Meffert and H. White with permission from Springer-Nature).

In Christie Hospital, all patients are routinely given conventional barium sulphate the day before the procedure to delineate the large bowel and then fasted from midnight of the day of procedure. If the patient does not already have a nasogastric tube , a 6 Fr KA2 catheter (Merit Medical, South Jordan, UT, USA) is passed over a hydrophilic wire from the mouth after topical anaesthesia and induction of sedation.

All procedures are performed under intravenous (IV) sedation administered by dedicated interventional nursing staff with training in sedation administration. IV fentanyl and midazolam are titrated under electroencephalographic bi-spectral index sensor monitoring until the target range of 80–85 is achieved. After IV injection of 20 mg of hyoscine butyl bromide or 1 mg glucagon, the stomach is inflated with hand-injection of 500–800 mL room air.

Where prior computed tomography (CT) indicates the liver to cross the midline, an ultrasound scan is performed to demarcate the left lateral edge of the liver using a skin marker. Adequate stomach distension is the single most important safety aspect of any gastrostomy technique, as it apposes the anterior gastric wall to the abdominal wall, shortening the trans-peritoneal route and displacing the colon inferiorly (or in the case of infra-colic puncture, superiorly).

After local anaesthesia to the skin and the peritoneum, gastropexy is performed under fluoroscopic guidance8 to appose the stomach to the inner abdominal wall. A central needle puncture between the gastropexy fixation sutures, once confirmed to be in the stomach under fluoroscopic guidance and contrast administration, is serially dilated to accommodate a peel-away sheath, through which the feeding tube is placed and secured with inflation of the retaining balloon.

A total of 1,156 gastrostomies were inserted over an 8-year period. A retrospective review was undertaken of 5 cases where infra-colic placement was required. Electronic patient records were reviewed including clinical consultations, procedure reports and images.

All patients were male and had head and neck cancer and required gastrostomy insertion to support nutritional intake. Four patients were undergoing radiotherapy with curative intent and were listed for RIG. A fifth patient required long-term gastrostomy feeding due to cognitive impairment and was listed for per-oral image-guided gastrostomy (PIG). The mean age was 79 years (73 to 84 years). The follow-up period ranged from 7 days to 54 months.

Patient 1 (73 years) presented in an acute confusional state with severe oral mucositis and intolerance of a nasogastric tube. He also had a background of Parkinson’s disease and metastatic squamous cell carcinoma from an unknown primary. A gastrostomy was deemed a safer feeding route.

Patient 2 (77 years) had squamous cell carcinoma of the larynx and had a gastrostomy insertion due to acute radiation laryngitis during his period of radical radiotherapy.

Patient 4 (84 years) had a background of laryngeal cancer and was noted to have silent aspiration on barium swallow.

Two cases had their procedures postponed due to either oral contrast not being administered the day before, or because of slow transit of contrast into the transverse colon. Both these cases were rebooked for the following day, providing good contrast opacification of the high transverse colon and confirming the necessity for an infra-colic approach. There were no reported major, immediate post-procedural complications. All five attempted infra-colic insertions were deemed technically successful with no abandoned procedures. Four patients underwent standard percutaneous insertion techniques (Fig. 4); the exception case is described below with deviation from standard practice decided upon due to clinical and holistic considerations rather than anatomical or technical reasons.

Figure 4. Infra-colic puncture of the stomach performed under fluoroscopic guidance. (A) The position of the needle inferior to the lower margin of the transverse colon (opacified with contrast). (B) Wire access into the stomach, over which the percutaneous, trans-omental gastrostomy tube is placed with confirmation of position on injection of contrast (C).

The gastrostomy for patient 4 was placed using a 16 Fr Corflo Push PEG (Halyard, Manchester, UK), in PIG technique.5 The patient suffered from laryngeal cancer with extensive upper neck nodal involvement, had significant other comorbidities, in particular severe Parkinson’s disease and dementia. This posed a challenge for compliance, tube maintenance and accidental tube extraction. After gastric inflation, the stomach was punctured via an infra-colic approach, a 7 Fr vascular sheath inserted and catheter and guide wire used to retrogradely cannulate the cardia and oesophagus. After exchange for a 260 cm guide wire from the PEG kit, the gastrostomy tube was then advanced antegrade over the wire through the mouth until it exited at the skin, where it was grasped and pulled into position. A CT was performed as a precaution, which showed a satisfactory infra-colic position of the gastrostomy tube (Fig. 5). The patient died 19 days post procedure from chest sepsis, presumed to be a consequence of aspiration. 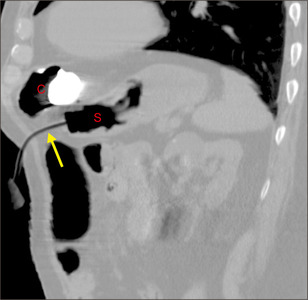 All attempted infra-colic gastrostomies achieved technical success with no abandoned procedures or complications.

The standard technique for radiologically guided gastrostomy placement has an excellent safety profile, with several dedicated systems available. While infra-colic gastrostomy insertion is identical to standard insertion from a practical standpoint, anatomical differences might make this unconventional route through additional structures initially un-appealing to clinicians unfamiliar with this method.

This leads to additional structures potentially being transgressed during an infra-colic gastrostomy, namely the gastro-colic ligament, the greater omentum, and the transverse mesocolon.

The gastro-colic ligament makes up the superior part of the greater omentum (along with the gastro-splenic and gastro-hepatic ligaments), extending from the greater curvature of the stomach to the transverse colon. Blood vessels traversing through the gastro-colic ligament, namely the left and right gastro-epiploic arteries, form an arcade at the greater curvature of the stomach, which may be at increased risk of needle trauma during infra-colic punctures.

Mirich and Gray11 described the principal of radiologically guided infra-colic gastrostomy in 1990 in a single case performed under CT guidance for a burns patient with repeated central venous line infections. Cantwell et al12 reported six cases in a review of their single centre experience in a recent review. A mean indwell time of 7 months without any reported technical failure, procedural related complications, late catheter related complication or deaths secondary to insertion. They also reported no issues in the two cases in which the gastrostomy was removed after no longer being required, nor in the single case of re-insertion being performed for recurrence of malignancy, cranial to the colon. The potential for increased risk of colonic obstruction has been suggested, but has not been reported in the very limited case descriptions available.13 CT guidance was recommended as the imaging modality of choice by Shin and Park,14 although the basis for this is not clear, perhaps suggesting the need to map out the variable vessel anatomy when transgressing through the peritoneal planes. None of the reported cases subsequent to Mirich and Gray’s11 1990 case were performed under CT guidance, and Cantwell et al12 utilised barium preparation of the large bowel, per oral the night before as in our institution to deliver absolute confidence in identifying the position of the transverse colon on fluoroscopy alone.

Despite the perceived difficulties, we suggest that infra-colic gastrostomies can be performed with confidence, and with little deviation from standard insertion techniques. As similarly shown in the few other available case reports, they can be inserted without an apparent increase in complications, although operators need to be aware of the anatomical differences and additional structures traversed when performing infra-colic gastrostomies.