Ampulla of Vater metastasis from squamous cell carcinoma of the esophagus

Esophageal cancer is one of the lethal malignant tumors because it is often diagnosed in the advanced stage with lymph node or distant metastasis. The recurrence rate of esophageal cancer is known to be about 40% to 50% even in the patients who underwent curative esophageal resection. Most frequent sites of metastases are known to be the liver. Furthermore, other distant metastases also could be developed in lung, bone, brain, kidney, adrenal, abdominal cavity, and skin. However, ampulla of Vater (AoV) metastasis rarely occurs from esophageal cancer. Therefore, we report herein a case of AoV metastasis from squamous cell carcinoma of the esophagus.

Esophageal cancer is a lethal malignant tumor because most patients are diagnosed at a late stage with distant lymph nodes or organ metastases.1 The prognosis of esophageal cancer is very poor and the five-year survival rate is about 20% according to the Surveillance, Epidemiology, and End Results (SEER) database of the National Cancer Institute, in the United States. Surgical resection remains the primary and the most important treatment modality for esophageal cancer as it provides the best chance of cure.2 However, it has been reported that about 45% to 50% of patients develop recurrences within 2 years even after radical surgery and the prognosis is very poor once the recurrence occurs.2,3 The recurrence may be local or it may be in distant organs. Usual sites of distant metastases are lung, liver, bones, adrenal glands and brain. Distant metastasis of esophageal cancer to ampulla of Vater (AoV) is very rare and only one case has been reported according to the literature review.4 Herein we report a case of ampullary metastasis in a patient with a locally advanced esophageal cancer who had undergone radial esophagectomy after neoadjuvant concurrent chemoradiotherapy.

A 48-year-old male was referred to gastroenterology department due to abnormal result of liver function tests. This patient had been diagnosed with locally advanced esophageal squamous cell carcinoma 10 months ago (Fig. 1). He received radical esophagectomy and regional lymph nodes dissection after neoadjuvant concurrent chemoradiotherapy and the pathologic stage turned out to be T1bN3M0. During the follow-up after the surgery, cervical lymph node enlargement was identified and biopsy was taken. Excisional biopsy revealed that it was metastatic lymph nodes from the esophageal squamous cell carcinoma. Therefore, the patient had been treated with palliative chemotherapy for 3 months. 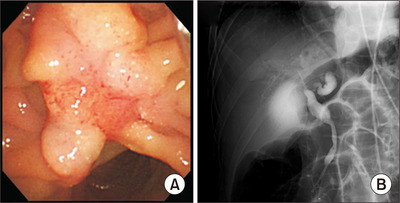 Figure 3. (A) Irregular shaped mass was noticed on ampulla of Vater. (B) Endoscopic retrograde biliary drainage with 7 Fr plastic stent was conducted. 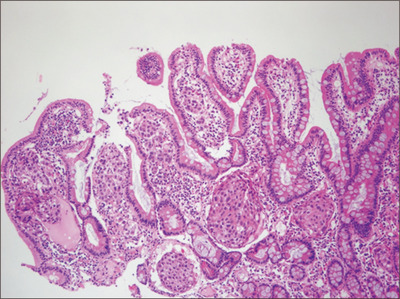 Figure 4. Metastatic squamous cell nests are found in the ampulla of Vater biopsy. Invasive tumor cells are noted in the lymphatics of mucosa (H&E, ×100).

Metastatic tumor of AoV is very rare. According to the Sarocchi et al’s case report and literature review,5 only 32 cases were reported until 2018. Renal cell carcinoma (34%) was the most common corresponding primary tumor, followed by malignant melanoma (31%) and breast cancer (13%). Other less common locations were uterine cervix, esophagus, ovary, femur, bladder, and larynx.5-7 Metastatic tumor of AoV from esophageal cancer is very rare and only one case has been reported.4

The presenting symptoms of metastatic tumor of AoV are similar to those of primary ampullary tumors. Jaundice, pruritus, or alterations in stool and urine can occur as a result of biliary obstruction. Abdominal discomfort and upper gastrointestinal bleeding also can occur. Endoscopic finding is important for the diagnosis of metastatic tumor of AoV, however it is usually indistinguishable from that of primary ampullary tumors. The typical endoscopic finding of ampullary tumor is discolored lobular/pine cone-like tumor.8 Tumors are generally soft and friable with irregular margin and can be ulcerated so that can cause easy bleeding.5

For the evaluation of metastatic tumors of AoV, imaging studies such as CT and magnetic resonance imaging are required to presume the primary origin of tumor. Biopsies and pathologic examination including immunohistochemistry are also required for the definitive diagnosis. The prognosis of patients with metastatic tumor of AoV is known to be very poor because it is a manifestation of distant metastasis from the primary site of cancer. Therefore, AoV metastasis is usually treated with palliative chemotherapy combined with endoscopic drainage for obstructive jaundice. However, surgical treatment such as Whipple resection could be considered when it occurs in patients with renal cell carcinoma, because time interval until the development of metastatic tumor is quite long and metastasis is usually confined to a single site.9,10

Renal cell carcinoma, breast cancer and malignant melanoma account for the most cases of metastatic tumor of AoV. However, ampullary metastases can occur in other various malignant tumors including esophageal cancer as seen in our case. Therefore, ampullary metastasis should be considered as one of the differential diagnosis for unexplained abnormality of liver function test in cancer patients even including esophageal squamous cell carcinoma.