A 56-year-old male underwent a Whipple procedure for duodenal stricture secondary to a 32-mm duodenal adenocarcinoma. The patient presented again 66 months later with obstructive jaundice caused by an obstruction in the afferent loop. Biliary drainage was performed to relieve the obstruction. Two attempts to cross the occlusion were performed, but these were both unsuccessful. Percutaneous transhepatic stent deployment through the obstruction has previously been described in similar cases but was not feasible in this case. An attempt at retrograde cannulation was performed from a direct puncture of the bowel but this failed. Rather than abandoning the case, an extra-anatomic approach was taken by passing a needle across the point of malignant obstruction forming a new track between the Roux loop and small bowel, enabling a covered stent to be placed and relieving the biliary obstruction. This avoided the need for permanent external biliary drainage and its associated complications. Extra-anatomic percutaneous stenting is a viable alternative for the treatment of malignant afferent loop obstruction following pancreaticoduodenectomy.

Afferent loop obstruction (ALO) is a rare complication and most cases of ALO following a Whipple procedure/pancreaticoduodenectomy (PD) or pylorus-preserving pancreaticoduodenectomy (PPPD) are of a malignant aetiology.1–4 Malignant ALO can be managed surgically, endoscopically, or percutaneously.5 A percutaneous endoscopic rendezvous procedure has also been described as effective in treating biliary obstruction.6 However, there are limitations in surgical and endoscopic approaches.1 A transhepatic approach can be used to cross and stent the obstruction.1,4,5 However, in this case, after an antegrade percutaneous approach had failed, a retrograde approach was undertaken percutaneously was undertaken percutaneously wand a new track was created across the occlusion. Crossing the occlusion, after other techniques had failed, allowed a stent to be deployed relieving the obstruction thus avoiding permanent external biliary drainage.

A 56-year-old male presented with a 32-mm lesion in the second part of the duodenum and PPPD was performed. Histology confirmed poorly differentiated adenocarcinoma of the duodenum.

Seventeen months later, the patient developed obstructive jaundice (bilirubin 129 µmol/L [1.46 mg/dL]) and obstruction in the Roux loop was identified on computed tomography (CT) and on magnetic resonance cholangiopancreatography as shown in Fig. 1A. At a multidisciplinary meeting, surgery was declined due to known peritoneal involvement. Endoscopic decompression was unsuccessful. 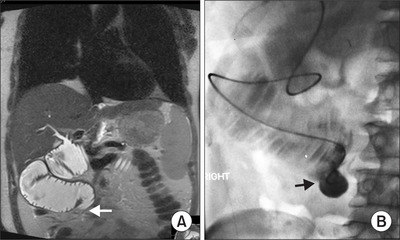 Figure 1. (A) Magnetic resonance cholangiopancreatography showing the level of obstruction in the Roux loop (arrow) and biliary dilatation. (B) Fluoroscopic image of an unsuccessful antegrade attempt to cross the occlusion (arrow).

A cholangiogram was performed demonstrating an obstruction at the anastomosis of the Roux loop and small bowel. An initial antegrade attempt to cross the occlusion was unsuccessful as shown in Fig. 1B and 2A. A biliary drain was inserted and left on free drainage to allow the system to decompress. 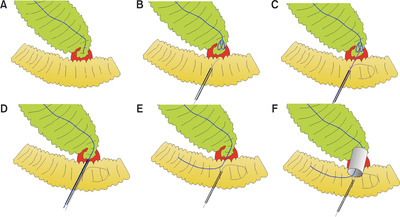 Figure 2. (A) Antegrade approach. (B) Retrograde approach. (C) New track formed with a 21-G needle. (D) A 6-Fr sheath placed to confirm suitability of the new track. (E) Guide wire inserted through the transhepatic approach with tip in the small bowel lumen distal to the obstruction. (F) Stent deployed.

In the second attempt, the patient also consented to a percutaneous retrograde attempt to cross the occlusion and 50 mL of Omnipaque (300 mg iodine/mL) was orally administered to opacify the bowel immediately prior to the procedure. The second antegrade attempt to cross the occlusion was unsuccessful. A 20 mm snare (EnSnare; Merit Medical, Tijuana, Mexico) was inserted as a target for the retrograde approach. A percutaneous puncture of the opacified small bowel distal to the obstruction and adjacent to the site of obstruction in the Roux loop was made with a 21-G micropuncture kit (S-MAK; Merit Medical) as shown in Fig. 3A. This was exchanged for a 4-Fr 11-cm vascular sheath (Brite tip; Cordis, Ciudad Juárez, Mexico) as shown in Fig. 2B. No gastropexy sutures were used because of the risk of fixing an adjacent loop of small bowel leading to small bowel obstruction or perforation. Attempts to cross the occlusion retrogradely using a guide wire and catheter were made but were also unsuccessful. 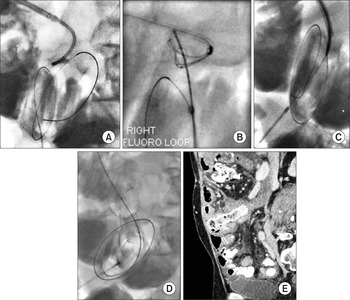 Rather than leaving the patient on external drainage, an extra-anatomic approach was attempted. A 16-cm 21-G needle was inserted through the 4-Fr sheath and used to puncture across the occlusion until the needle tip was confirmed to be in the lumen of the Roux loop, thus creating a new track across the Roux loop occlusion. A 200-cm 0.018-inch guide wire (V18; Boston Scientific, Heretia, Costa Rica) was inserted through the lumen of the needle and then snared from the transhepatic access in the Roux loop as shown in Fig. 2C and 3B. The 4-Fr sheath was exchanged for a 20-cm 6-Fr sheath (MAK NV; Merit Medical) and advanced over the wire until it was in the Roux loop, as shown in Fig. 2D. Contrast was injected while withdrawing the sheath to confirm there was access to both the Roux loop and unobstructed small bowel; this also confirmed that there was no peritoneal extravasation, indicating it would be safe for stent deployment. A catheter was passed from the transhepatic side over the wire and across the occlusion, enabling placement of a 0.035-inch guide wire distal to the obstruction in the unobstructed small bowel as shown in Fig. 2E and 3C. From the transhepatic side, a 20 mm × 8 cm fully covered duodenal stent (HiIzo; BCM, Goyang, Korea) was inserted and deployed across the occlusion and dilated using a 16-mm balloon (Atlas Gold; Bard, Tempe, AZ, USA) as shown in Fig. 2F and 3D. The 6-Fr sheath for percutaneous access to the small bowel was then removed.

Adequate positioning of the Roux loop stent and resolution of obstruction was confirmed by CT, as shown in Fig. 3E and biochemically (bilirubin 78 µmol/L [0.88 mg/dL]) at 4 days after stent deployment. Following removal of all percutaneous access, the patient was discharged home after 4 days and died from disease progression 59 days later.

Post-PD or post-PPPD ALO is a rare but serious complication, with an incidence of 0.2% to 20%.2 Benign aetiologies of ALO include internal hernia and kinking or inflammation at the site of anastomosis,5 while malignant causes are due to tumour recurrence or metastasis.2 Patients with ALO may present non-specifically with abdominal pain, nausea and vomiting, fever, and obstructive jaundice. Patients who have undergone PD or PPPD are at risk of cholangitis or jaundice due to the absence of papillary function, which necessitates immediate treatment.1,2,7

Surgical options such as jejunojejunostomy or Roux-en-Y bypass are effective ways of treating malignant ALO, but are invasive with higher morbidity and mortality rates than less invasive approaches.5,7,8 Surgery was ruled out in this case due to known peritoneal involvement.

The use of endoscopic metal stents in post-PD malignant ALO patients is safe and efficacious with a low rate of recurrence.3,9 However, endoscopic access is not guaranteed and failed in this case. A presentation of obstructive jaundice suggests that significant occlusion of the afferent loop has already occurred, making success less likely.7

The use of percutaneous transhepatic stent deployment has been described in cases where the occlusion was successfully crossed from an antegrade approach.1,4,10 Access via direct percutaneous puncture of the Roux loop has also been described and has been successfully used in ALO patients.1,7 However, direct Roux loop access was not attempted in this case because the Roux loop was posteriorly placed and had not been secured to the anterior abdominal wall at the time of initial surgery.

Treating the patient with percutaneous transhepatic biliary drainage and leaving the patient on permanent external biliary drainage is undesirable and can cause a range of clinical problems. Furthermore, this patient did not regard it as acceptable to be discharged home on permanent external biliary drainage. Consequently, a percutaneous retrograde approach was attempted. Animal studies have demonstrated that small punctures (up to 2 mm) in viable unobstructed bowel are most likely to heal spontaneously without consequence.11 It was therefore deemed safe to access the unobstructed small bowel distal to the point of obstruction with a 6 Fr diameter device. It was not possible to cross the occlusion with a guide wire via the retrograde approach. Rather than abandoning the case, a new track using sharp recanalisation was performed. Although creation of a new track poses a risk of bowel injury and subsequent peritonitis,1 the risk was minimised by limiting the temporary percutaneous access to 6 Fr and by confirming that the track extended from lumen to lumen with no peritoneal extravasation prior to stent deployment.

Extra-anatomic percutaneous stenting is a feasible and an alternative approach in the management of malignant ALO following PD or PPPD when the occlusion cannot be crossed by other means.