A 2-year-old child presented with button battery (BB) ingestion that had taken place 5 months previously. The BB was impacted within the post-cricoid esophageal wall without an obvious perforation or communication with the trachea. In view of the high surgical risk, we attempted to remove the BB endoscopically. BB removal was not possible with conventional devices due to the post-cricoid location and the invagination of the BB into the esophageal wall. We dissected the BB from the surrounding esophageal wall using an insulated tip (IT) knife and successfully extracted the BB. The use of an IT knife prevented inadvertent injury or perforation while dissecting the BB, and surgery was avoided.

Accidental foreign body (FB) ingestion is common in preschool children. Coins, toys, and batteries are common FBs ingested by children.1 Five percent of ingested button batteries (BBs) are impacted in the esophagus, requiring urgent removal.2 Although the majority of FBs pass through the gastrointestinal (GI) tract spontaneously without any intervention, BBs warrant immediate removal.3 If not removed timely, ingested BBs cause mucosal injuries ranging from superficial mucosal erosions to esophageal perforation and tracheo-esophageal or aorto-esophageal fistula. The severity of a mucosal injury largely depends on the duration of exposure, size of the battery and chemical composition of the battery. The mechanism of tissue damage by lithium batteries is the generation of electric current, electrolysis of fluid, and production of hydroxides at the negative end of the BB.4 The main factors increasing the risk of serious consequences are delayed presentation and longer contact with the GI mucosa due to impaction. Within few hours of BB ingestion, transmural esophageal damage and further complications, such as perforation, tracheobronchial fistula, damage of major blood vessels, or massive bleeding can occur.4,5 Previous studies have shown that children’s age (4–6 years) and the size of the BB (2–2.5 cm) were associated with severe complications.4,6

In the present case report, we describe a 2-year-old boy whose battery ingestion was overlooked, and who had an impacted battery in the upper part of the esophagus. We removed the impacted battery with a novel technique using an insulated tip (IT) knife. Endoscopic dissection and cutting of the esophageal membrane with the IT knife enabled endoscopic removal of BB, thereby avoiding the need for surgery with its accompanying morbidity.

A 2-year-old boy with normal development was referred to the Department of Gastroenterology for removal of a BB. The medical history suggested that about 5 months earlier, while playing, the child accidentally swallowed a BB. Initially, the mother of the child did not observe any complaints. An X-ray chest showed an FB in upper esophagus that was initially managed conservatively (Fig. 1A). No further endoscopic evaluation was done at that time. The child was lost to medical follow-up, but continued to have reduced oral intake, periodic uneasiness during swallowing, and excessive crying (mostly while eating large solid meals) for the 5 months prior to the patient’s referral to our department. The patient was treated for fever and mild cough in the last month with oral medicines.

Figure 1. (A) Initial X-ray of the child showing a foreign body. (B) Repeat X-ray after 5 months showing the foreign body.

Upon presentation to our center, the patient was vomiting daily. The mother also noticed that the child had some difficulty swallowing solid food, and preferentially avoided solid and semifluid food, with good acceptance of milk. He was evaluated at our center and a repeat X-ray showed a round metallic shadow of 2 cm in diameter in the esophagus (Fig. 1B). A physical examination demonstrated a lower age-appropriate weight and redness of the mucous membrane of the pharynx. Diagnostic esophagoscopy was performed under general anesthesia after obtaining consent from the parents, using a GIF xp160 endoscope (outer diameter, 5.4 mm; Olympus, Tokyo, Japan), which revealed a narrowing in the esophagus, at 13 cm from the incisor line, with part of a metallic FB invaginated by a thick fold of esophageal mucosa (Fig. 2). 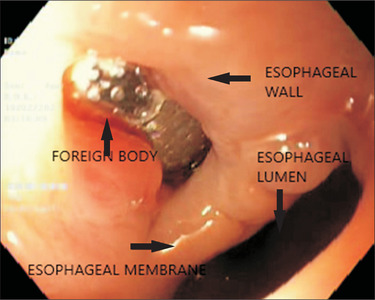 Figure 2. Endoscopic view of foreign body eroding into the esophagus.

Due to the high risk of perforation, a decision was made to delay the attempt to remove the FB using an endoscope, after taking steps for surgical backup. Pre-endoscopy computed tomography (CT) did not show any perforation or fistula near the FB. Esophagoscopy was performed under general anesthesia, by using a GIF H190 endoscope (outer diameter, 9.2 mm; Olympus). A larger-diameter high-definition (GIF H190) scope was chosen to pass a larger accessory. Direct removal with rat tooth forceps, Roth Net, a stone extraction basket was not possible due to the post-cricoid location and invagination of part of the battery within the esophageal wall. An IT knife has an insulated ceramic tip that prevents the transmission of current to the muscle layer during dissection. We decided to cut the thick esophageal invaginated membrane with an IT knife. Careful dissection was done to separate the impacted BB from the base of the esophageal wall with the IT knife, and the BB was disimpacted from the wall with the tip of the IT knife (Fig. 3A). The dissected BB was extracted with rat tooth forceps. Upon inspection after removal, the base of the esophageal wall did not show any muscle injury at the site of the BB (Fig. 3B). The removal of the BB was complicated by mild oozing from the esophageal membrane. The removed button lithium battery was 20 mm in diameter. A nasogastric tube was inserted for feeding. Two weeks later, endoscopy showed a small diverticular opening and neck CT with oral contrast showed a small diverticulum without any leak (Fig. 4). No abnormalities were found in the lower part of the esophagus, stomach, or duodenum. After the examination, oral feeding was started, initially with liquid and then with semi-solid food—with good clinical tolerance.

Figure 3. (A) Insulated tip (IT) knife dissection. (B) Post-dissection.

The present report describes a case of a 2-year-old boy for whom the diagnosis and treatment associated with ingestion of a FB had an extremely long delay of a few months. The reason for the delay was non-specific clinical signs, which were initially mild. The symptoms of FB ingestion are non-specific, such as vomiting, abdominal pain, diarrhea, fever, irritation, dysphagia, cough or wheezing, and even no symptoms at all. In the pre-school age group, a reason for delayed diagnosis could be a lack of effective verbal or nonverbal communication. In the described case, although the patient had been seen previously, primary endoscopic FB removal was not done, and the patient presented to us after 5 months of delay due to worsening of symptoms.

The two most important predictive factors of a severe course after BB ingestion are age (less than 4 years) and the size (≥ 20 mm) of the swallowed BB.4 In this case, the child was fortunate not to develop serious complications even after 5 months. Successful endoscopic removal of a BB has been described in a child with delayed presentation.8 In a case series of BB ingestion, a longer duration of the BB in the esophagus (2 weeks) was a predictor of mortality.4

The management of FBs is based on collected experience and not on controlled clinical trials. Several endoscopic procedures have been described for removal, including extraction with forceps, balloon extraction, bougienage, and magnetic extraction; if endoscopic procedures fail, surgery is an option.9 In our case, the BB was embedded in the esophageal lumen and corroding muscularis propria. Impacted FBs have a high risk of perforation and may require surgical intervention. We used an IT knife to dissect and expose an impacted BB from the muscularis layer and removed it with rat-tooth forceps. An IT knife has an insulated ceramic tip that prevents the transmission of energy to the muscle during dissection. We attempted endoscopic removal of a BB based on a previous case report describing the use of an IT knife.10

Delayed complications such as tracheobronchial fistula and esophageal stenosis can develop after a few weeks to months after endoscopic removal. In our case, on follow-up after 2 weeks, there was a small diverticulum at the BB site and thoracic CT showed no leakage from the site.

In summary, ingestion of a BB should be treated promptly and carefully because of the potential for serious complications. In this case, we applied an IT knife successfully for the endoscopic removal of an impacted BB in the upper esophagus and avoided surgery.