Successful management of a chronic post-surgical gastrocutaneous fistula using as a route for enteral feeding tube placement: A case report

Gastrocutaneous fistula is a rare complication of gastric surgery and difficult to manage. Because only 6% of cases close spontaneously, surgical or endoscopic repair is usually required. However, in older patients who are often ineligible for aggressive treatment, more conservative treatment options are needed. Herein, we report a case of a chronic gastrocutaneous fistula secondary to distal gastrectomy with Roux-en-Y gastrojejunostomy performed 5 years prior that was managed with intestinal feeding tube insertion through the fistula tract.

Gastrocutaneous fistula (GCF) is rare complication of gastric surgery.1 Compromised blood supply to the gastric remnant during operation is thought to be the main underlying pathological mechanism,2–4 leading to highly fatal sepsis (85% mortality).5 Because spontaneous closure of GCF occurs in only 6% of cases, aggressive treatment such as surgical or endoscopic management is often needed.4 However, since such treatments are not applicable to all patients, especially older patients with a short remaining life span, a more conservative treatment alternative is needed. Here we report a case of GCF that occurred 5 years after distal gastrectomy with Roux-en-Y gastrojejunostomy and was managed by enteral feeding tube insertion through the fistula.

This study was approved by our institutional review board, which waived the requirement for informed consent (IRB No. SCHUH 2022-04-006).

An 80-year-old female presented to our hospital with generalized weakness. She had undergone distal gastrectomy with Roux-en-Y gastrojejunostomy for advanced gastric cancer 5 years prior. She was unable to communicate because of dementia, was bedridden, and was fed through a nasogastric tube (NGT).

On hospital day 13, the patient’s caregiver referred the patient to physicians for skin ulcer on the left flank that occurred for unknown reasons. The next day, the NGT was pulled out, and re-insertion was performed. Soon after, the tip of the NGT was found to have escaped through the skin ulcer on the left flank. A retrospective review of the film showed a gradual shift in the tip of the NGT to the lateral region (Fig. 1).

The patient underwent contrast-enhanced abdomen CT (Fig. 2), which revealed a GCF between the gastrojejunostomy site and the skin overlying the left flank area. The NGT tip had escaped through this tract. There was no evidence of local tumor recurrence or metastasis at the gastrojejunostomy site or in the abdominal cavity. The patient’s caregiver reported that the skin ulcer had been noted 4 months prior, but had healed spontaneously. Because peritoneal signs were absent, and the GCF was not in the acute stage, enteral feeding tube insertion through the fistula was planned.

After cutting off the tip of the NGT, a 0.035-inch guidewire (Radiofocus; Terumo Corp., Tokyo, Japan) was introduced into the stomach through the NGT, and the NGT was removed through the nose (Fig. 3, 4). An angiographic catheter (Impress; Merit Medical, South Jordan, UT, USA) was inserted into the gastric cavity, and an iodinated contrast agent was injected through the catheter. After confirming that the contrast agent traveled smoothly to the distal jejunum, the guidewire was placed in the proximal to mid jejunum and a 14-Fr pigtail catheter (biliary drainage catheter; Cook Medical, Bloomington, IN, USA) was inserted in the proximal jejunum, as we did not have an appropriate enteral tube at our intervention unit. A week later, we replaced the pigtail catheter with a 14-Fr jejunal feeding tube (MIC* J feeding tube; Halyard Healthcare, Inc., Yokohama, Japan) (Fig. 5). Enteral nutrition via jejunal feeding tube was initiated immediately. The patient was managed conservatively and maintained on a diet through the enteral feeding tube. She had been followed-up at an outpatient clinic. 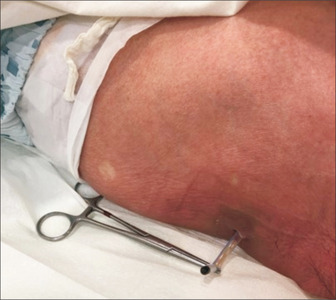 Figure 3. Patient observed in the intervention unit. The nasogastric tube tip was seen on the left flank through the fistula, but there was no evidence of inflammation or infection. 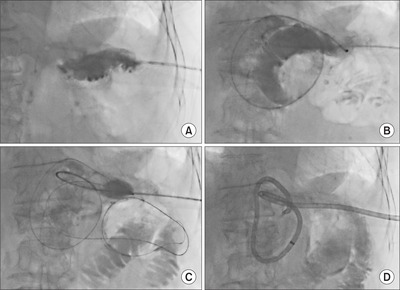 Figure 4. A pig-tail catheter insertion through the gastrocutaneous fistula. (A, B) After removal of the nasogastric tube through the nose, an angiographic catheter inserted in the gastric cavity confirmed that the contrast agent traveled smoothly to the distal jejunum. (C) The guidewire was placed in the proximal to mid jejunum, and (D) a 14-Fr pig-tail catheter (biliary drainage catheter; Cook Medical, Bloomington, IN, USA) was inserted in the proximal jejunum. 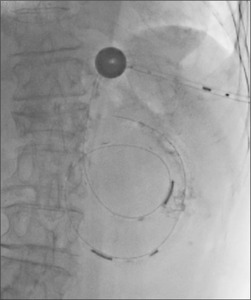 GCF is a rare complication of gastric surgery, occurring in 0.5% to 3.9% of patients.1 Although the stomach is known for its rich collateral circulation and strong to ischemia, sequential ligation of the arterial blood supply to the stomach during surgery can prevent complete healing of a suture line.3,4,6 Anastomotic leakage or rupture induces abscess formation, and may lead to GCF formation.4,7,8 Once GCF develops, ensuing sepsis is critical with an associated mortality rate of 85%.5 Because GCF associated with recent gastric surgery closes spontaneously in only 6% of cases, surgical or endoscopic management is usually required.4

In our case, the patient had a fistula between the gastrojejunal anastomosis site and left flank skin. Although it was difficult to determine the exact onset of the fistula, caregiver reports suggested at least 4 months. Because the patient had no clinical indications or imaging findings of peritonitis, the fistula was thought to have developed gradually. Unlike in previous reports, our patient did not need any emergent management because her vital signs were stable. Surgery was not feasible because of her deteriorating condition. As she was dependent on tube feeding, we decided to insert an intestinal feeding tube through the fistula to support nutritional supplementation. The clinical course was good.

The time interval from surgery to GCF formation in our patient was approximately 5 years. In a previous case report,9 the authors reported the progression of a 31-year-old obese female who underwent sleeve gastrectomy as a bariatric surgery and was re-admitted with GCF 4 years later. Here, conservative treatment failed, and a total gastrectomy and fistulectomy were performed.

NGT is an important nutritional route for the management of patients with poor voluntary oral intake, functional or mechanical dysphagia, and intestinal failure.10 NGT is routinely done in hospitals; however, the procedure is associated with several complications, which are usually due to misplacement or procedural trauma.11 Gastric perforation is not a common complication of NGT insertion,12,13 and it is unclear whether NGT itself contributes to the formation of GCF. In one case report,14 NGT insertion-induced intestinal perforation was reported in a patient with a history of Roux-en-Y gastric bypass performed 9 years prior. The patient died 40 days later despite antibiotic therapy. The authors noted that the small volume of the gastric pouch following distal gastrectomy meant that there was insufficient room to allow for tube coiling when excess NGT length was inserted, making the gastrointestinal tract prone to perforation. Most reported cases of gastric perforation by NGT insertion were followed by rapid clinical deterioration, requiring emergent management, such as surgical repair or endoscopic clipping, in some.13 We believe that the main cause of GCF formation was anastomotic leak or rupture, but there is a possibility that repeated insertion and longstanding placement of NGT contributed to anastomosis leak or rupture.

In conclusion, we managed a case of GCF by inserting an intestinal feeding tube through the fistula. It is meaningful to know that GCF is rare but can develop several years after gastric surgery. Although this is not a mainstay treatment to close GCF, it may be considered as an alternative management option, especially for older patients with short remaining life span who are frequently ineligible for aggressive treatment.