Amoebic liver abscess with jaundice is not uncommon, but jaundice with intractable pruritus due to it is extremely uncommon. We present a case of amoebic liver abscess who had mild icterus at presentation and improved within seven days of conservative management with the decrease in abscess size. One month later, he presented with severe pruritus and deep jaundice. On evaluation, no other cause could be identified to explain his jaundice and severe pruritus other than a residual abscess. Therefore abscess was drained but neither his jaundice nor pruritus responded to the aspiration of abscess. After one week he underwent endoscopic retrograde cholangiopancreatography (ERCP) and biliary stenting despite he not having any intra or extra-hepatic biliary dilatation. Following biliary drainage, his pruritus improved completely, and bilirubin became normal over the next few days. In conclusion, bilio-vascular fistulas, when present can lead to severe pruritus and, biliary drainage is an effective treatment for it.

Jaundice in patients with an amoebic liver abscess (ALA) is a frequent occurrence. Its incidence varies between 6% to 29%.1 During illness, almost one-third of the patients may develop clinical jaundice. The cause of jaundice in patients with an ALA is probably either due to secondary infection of ALA, or pressure of the abscess on hepatic ducts with stasis of bile in the intrahepatic biliary radicles (IHBR). According to another study, jaundice in the ALA is due to parenchymal destruction or cholestasis.2 The majority of these patients with jaundice responds well to drainage of abscess with a combination of metronidazole and di-iodo-hydroxyquinoline.1 We report an unusual case of ALA who initially improved with conservative management with the decrease in size of the abscess but presented one month later with severe pruritus and deep jaundice with no extra or intrahepatic biliary dilatation. He underwent abscess drainage without any significant improvement. At last, he underwent biliary drainage which improved his pruritus and jaundice both.

A thirty-five years old male was admitted with symptoms of right upper quadrant pain, fever of four days duration and vomiting for last one day. There was no history jaundice in the past, loose stools or gastrointestinal bleed. He was taking approximately 40 grams of alcohol per day for the last fifteen years. Clinical examination revealed mild icterus, mild pedal oedema, soft, tender hepatomegaly, and tenderness in the right hypochondriac region. His sonography revealed an abscess of 6.4 cm × 7.5 cm × 6.6 cm in the right lobe of liver with grade I fatty liver. Amoebic serology done by the Indirect haem-agglutination test was positive. His hemogram and liver function test are given in Table 1, column 1. He was treated with metronidazole and became asymptomatic in the next three days. On day seven, repeat sonography showed a reduction in the size of the abscess and was discharged on oral metronidazole with supportive treatment. He was counselled for absolute alcohol abstinence. One month later he presented with intractable pruritus of 4 days duration, which was more severe in the night. On the visual analogue scale (VAS), the score of pruritus was 5/10 during day time and 9/10 during night time. Clinical examination revealed deep jaundice, mild hepatomegaly, minimal right upper quadrant tenderness. There was no pedal oedema or ascites or any other stigmata of chronic liver disease. He was investigated with hemogram, which was within normal limits. His liver function test (Table 1, column 2) revealed high bilirubin which was predominantly conjugated (total bilirubin 11.6 mg/dL with conjugated bilirubin 9.6 mg/dL). The test for superimposed acute viral hepatitis A, E, were negative. Sonography of the upper abdomen revealed an abscess which had significantly reduced as compare to previous sonography and now measures 5 cm × 6 cm × 5 cm with no intra or extra-hepatic biliary dilatation. Magnetic resonance imaging upper abdomen with magnetic resonance cholangiography showed a well-defined thin-walled abscess in segment VIII of the liver extending up-to porta and splaying both hepatic ducts with the prominence of the IHBR (Fig. 1). Because of the prominence of IHBR and splaying of both hepatic ducts and no respite in itching with pharmacotherapy, percutaneous aspiration of the abscess was done. However, there was no significant improvement in itching even after 7 days of abscess drainage. Subsequently, the patient underwent endoscopic retrograde cholangiopancreatography (ERCP). At ERCP the common bile duct (CBD) appeared normal with near-normal IHBR. There was no stone or sludge seen within CBD. There was evident communication seen between the abscess cavity and the biliary system though the abscess cavity was very small (Fig. 2). Given demonstrable communication between residual abscess cavity and biliary system, biliary stenting was done (Fig. 3). After three days, his pruritus improved completely. His jaundice also improved over the next few days. On follow up at three months, the patient was asymptomatic with complete resolution of the abscess cavity. His biliary stent was removed during this visit. 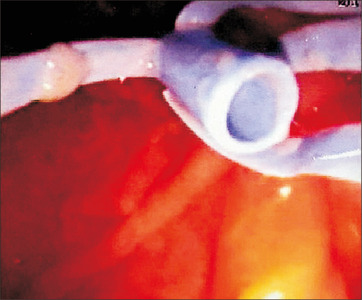 Hyperbilirubinemia in the ALA is not uncommon.1 Causes of jaundice in the ALA are still not fully understood. Various mechanisms have been proposed to explain jaundice in patients with ALA, such as pressure on biliary ducts1,3 or as being cholestatic or parenchymal in nature.4 It has been shown that bromosulfophthalein (BSP) excretion by hepatic parenchymal cells, was significantly reduced with well-preserved storage capacity in patients with ALA and ALA with jaundice suggesting a decreased hepatic excretory function as one of the causes of cholestatic jaundice.1,5 It was further demonstrated that damaged biliary ducts and hepatic veins in the ALA could lead to the formation of bilio-vascular fistula. The concept of the bilio-vascular fistula is further supported by delayed BSP excretion in patients with ALA with jaundice.1,5 Clinical manifestations of bilio-vascular fistulas depend on the pressure gradients between the vascular system and the bile duct.6 The pressure gradient across a bilio-vascular fistula involving a venous system (portal or hepatic), directs the bile and blood mixture toward the right side of the heart which is termed as “bilhemia” leading to a rapid rise of bilirubin without much enzyme increase.7 Bilhemia is a frequent occurrence after traumatic injury to the liver.8 Bilhemia has been demonstrated in a series of twelve patients of ALA with jaundice. However, none of the patients in this study revealed intense pruritus as the primary manifestation. All patients had a normal biliary system with no evidence of biliary obstruction or biliary dilatation. All twelve patients in this study had communication between the biliary system and the abscess cavity. All twelve patients improved by percutaneous aspiration with naso-biliary drainage with complete resolution of abscess and jaundice.6 The principle of therapy of bilio-vascular fistula is the reversal of bile flow by a decrease in the pressure gradient across the sphincter of Oddi thereby preventing entry of bile into the abscess cavity and hence into the hepatic vein. This is based on a similar principle where sphincterotomy with or without biliary stenting, have been used to facilitate biliary drainage and leak closure in patients with post-cholecystectomy biliary leaks by decreasing the pressure gradient across the sphincter.9 Normalization of bilirubin and improvement in pruritus with biliary drainage support bilio-vascular fistula as the cause of jaundice in our patient with ALA. This is probably one of the rare cases where the patient developed jaundice and intense pruritus almost one month after treatment of ALA with good clinical response initially. And secondly, even among all case series of ALA with cholestatic jaundice, pruritus is not the main symptom. In conclusion, cholestatic jaundice in patients with an ALA is possibly secondary to biliovascular fistula. Biliary drainage is an effective method of treatment of such patients.