Achalasia is the most common esophageal motility disorder, characterized by aperistalsis of esophageal body and incomplete relaxation of the esophageal sphincter. Treatment of achalasia has gradually transformed from invasive to minimal invasive. A minimally invasive technique, peroral endoscopic myotomy (POEM), has been developed for the treatment of achalasia with the use of advanced endoscopic tools and techniques. Nowadays, POEM has emerged as an effective and safe therapeutic tool for permanent cure.1

POEM is technically complex procedure, requires high endoscopic skill and has a long learning curve. The prime requisite of the procedure is a clean esophagus with healthy mucosa. Mucosa is the only cover over the myotomy to prevent post-operative leak and perforation. Hence having a clean esophagus is mandatory.2 In achalasia, patient’s esophagus is aperistaltic, significantly dilated, tortuous and angulated which can retain significant amount of food debris and fluid which increases the risk of postoperative infection and aspiration during POEM if not cleaned thoroughly pre operatively. In addition, clean esophagus ensures clear endoscopic view during POEM. Hence, it is essential to clean the esophagus in an appropriate manner prior to POEM.1 Unfortunately, there is no reference to a standardized preparation for esophageal cleaning. Conventionally, the patient is given a liquid diet for 3 to 4 days except milk and an endoscopic assessment is performed on the day before the POEM. Esophagus is thoroughly lavaged with water and cleaned of all residual debris and fluid. The patient is then kept nil per orally (NPO) till the procedure is performed. Conventional preparation differs from centre to centre depending on the operator’s choice and experience. Period of preoperative fasting is also variable depending upon the amount of residue the operator finds. Sigmoid esophagus would require prolonged fasting.

The idea of using warm water for esophageal clearance struck when one of the authors saw a radiologist perform a barium examination in a patient of achalasia. The barium column was not passing across a tight lower esophageal sphincter (LES). Then the radiologist asked his assistant to give a bolus of warm water to the patient, the LES opened and the barium column immediately passed into the stomach seen on fluoroscopy. This inspired us to perform a comprehensive literature search, which revealed that hot food/water and carbonated drink relieves spasm at the LES, alters esophageal motility and allows food and fluid to pass in the stomach.3–7 On these grounds, we designed a novel preparation using lukewarm water and carbonated drink to assess the effectiveness, safety and reduction in time required for esophageal clearance in patients of all types of achalasia before POEM procedure.

This was a single center, prospective case-control study that included all patients who underwent POEM for the treatment of achalasia between January 2017 and November 2019. The study was approved by institutional ethics committee of the Surat Institute of Digestive Sciences (protocol no. SIDS-17-01) and signed informed consent was taken from each patient. Diagnosis of achalasia was based on preoperative clinical assessment, barium bolus examination, an upper gastrointestinal (GI) endoscopy and high-resolution manometry (HRM). Depending upon the findings of upper GI endoscopy, we established a working scale for describing the esophageal condition based on residue it had.

In the Novel preparation, patients were allowed routine diet till 24 hours prior to the procedure. They were then asked to be on liquids from morning on pre procedure day. They were then given 2 L of lukewarm water (2 gulps at a time) accompanied by 1 L of carbonated drinks (Limca manufactured by Coca Cola; 1 gulp at a time) alternatively for 6-hours, starting previous afternoon and then they were fasting overnight (NPO) from 10 p.m. onwards. Procedure was done at 8am the next morning in all cases.

On the other hand, in conventional preparation, controls were made to stop diet 48 hours prior to procedure, allowed only clear liquid diet for 48-hours. Upper GI endoscopy was performed under sedation on the day prior to POEM to evaluate esophagus clearance and thorough lavage was given for complete cleaning. Patients were NPO for next 12-hour prior to procedure. Procedure was done at 8 a.m. the next morning. All patients were admitted to hospital day prior to the procedure.

This was a working score established in conjunction with our anesthesiologist to assess the quantitative risk of aspiration during endotracheal intubation objectively to assess if the new model of preparation helps to reduce the risk of aspiration. It is not a standardized scale as we could not find such a scale on doing research, but as our anesthetist observed the difference in aspiration during intubation, we established this scale to see if our observations were statistically significant.

In the conventional method all patients were scoped the day before and esophagus was cleaned thoroughly. In the new method, no prior day endoscopy was done and directly scope introduced after endotracheal intubation while doing POEM and rate of reflux assessed by the anesthetists for any increased risk.

Diabetic patients and patients with the specific age group (aged < 15 years, > 60 years) were closely monitored for esophageal clearance method. No patient in any group had difficulty if drinking the stipulated amount of fluid. A few took a little longer time but could drink it without vomiting.

Continuous data were reported as the mean and standard deviation and categorical data were presented as frequency and percentage. Comparison of continuous variables was done using student’s independent test and categorical variables were compared using chi-squared test. A -value of < 0.05 was considered statistically significant. All statistical analysis was performed using the SPSS ver. 16.0 software (SPSS Inc., Chicago, IL, USA).

POEM was carried out in 150 patients (male 54.0%, mean age 41.2 ± 15.5 years) during the study period. All POEMS were performed by a single endoscopist with the assistance of a nurse, 2 technicians and a dedicated anesthesia team in our endoscopy unit. The patients were distributed in novel and conventional preparation group trying to have almost equal number of type I, type II, and type III cases in each arm. Type II and type III had cases with sigmoid esophagus, and these were considered in data analysis along with the other cases. An identical baseline characteristic of study population is summarized in Table 1. 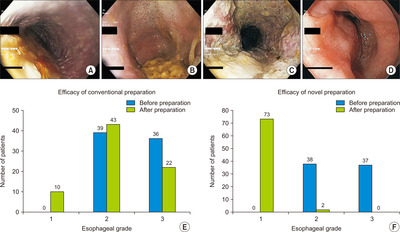 All patients in conventional group underwent pre-POEM endoscopic cleaning. Majority of cases in the conventional group were having anesthesia risk scores of 2 (62.7%) and 3 (34.7%). On the other hand, novel preparation group reported risk score 1 in 96.0% and score 2 in (4.0%) and score 3 in no cases. This suggests that in the novel preparation no prior cleaning of the esophagus was required (Fig. 4). 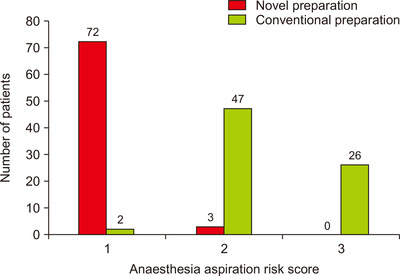 The detailed primary and secondary outcome measures were illustrated in Table 2.

A clean esophagus is a prime requisite for POEM procedure to ensure safety and success of POEM. Unfortunately, limited literature is available describing the importance of esophageal cleaning before POEM. The present study is aimed to evaluate the importance, safety and efficacy of the novel pre-POEM preparation for esophageal clearance. Hence, the prolonged fasting with consumption of clear liquids in conventional preparation was substituted with lukewarm water and carbonated drink to achieve effective esophageal clearance before POEM. This substitution demonstrated several potential advantages to the patients as it shortened the period of fasting and reduced aspiration risk score. Most importantly the novel preparation minimizes necessity of pre-POEM endoscopic cleaning. Thus, reducing one more endoscopic procedure for the patient along with its incipient anesthesia risk and cost.

Studies have recommended that lukewarm water and warm food to the patients with achalasia increases motility of esophageal body, reduces LES pressure and increases LES relaxation. Thereby providing symptomatic relief.3,4,6 Moreover, carbonated drink causes disintegration of the food particles due to the release of carbon dioxide. The released carbon dioxide further triggers relaxation of LES to facilitate passage of bolus into the stomach.5,7 In addition we did testing of the effect of warm water on the LES during esophageal manometry of five patients to be sure of our protocol and we found that giving warm water causes transient relaxation of the LES and decrease in IRP which has been documented in Fig. 5.

To optimize the amount and duration of lukewarm water and carbonated drink, we performed an in-house analysis and obtained an absolute esophageal clearance with 2 L of lukewarm water and 1 L of carbonated drink within 6 hours. Three liter was chosen from our experience of preparation of the colon prior to colonoscopy where patients drink 2 L of polyethylene glycol solution in 2 to 3 hours and therefore we considered an additional 1 L in a total of 6 hours as a tolerable amount for the patient and all the patients complied very well with this formulation. Even children below 15 years and elderly above 65 years did not have any difficulty. The reason probably was that the retained fluid in the esophagus emptied with warm boluses as shown by our manometry findings also and the patients found it convenient to drink the stipulated amount of liquid.

Tanaka et al8 reported one novel endoscopic assisted esophageal clearance method for advanced achalasia. This novel technique performed one day before or immediately before POEM, to remove food debris using super-slim-gastroscope and gastric tube. Although this is an efficient technique for esophagus clearance, it has two major limitations: (1) utility only for advanced achalasia (2) requirement of anesthesia with a day before the procedure (high cost), limits its use in routine clinical practice.

The two patients who had Grade II esophagus after this method were both tertiary achalasia with massively dilated and sigmoid esophagus and had significant food residue at the primary endoscopy. Those two were the only cases where we needed lavage before the POEM started and not on the previous day as we found the esophageal cleansing lacking.

In conclusion, results of our present study demonstrate a simplified preparation in comparison to the cumbersome conventional preparation. Evidently, the novel preparation is efficient, safe and appropriate for the patients with any type of achalasia. However, for the further standardization of the novel preparation, a large, randomized control, multi-centre study is required.