Gastroduodenal artery steal syndrome is an uncommon complication occurring after orthotopic liver transplantation (OLT) that results in hypoperfusion of the hepatic artery increasing the risk for graft dysfunction. Its non-specific clinical and imaging findings often delay diagnosis and increase the chance for re-transplantation or death. The lack of diagnostic criteria and definitive risk factors for developing the syndrome creates a need for angiography to visualize anatomical and perfusion characteristics indicative of the phenomenon. We present a 47-year-old male who underwent OLT and developed gastroduodenal artery steal a week after surgery. The diagnosis was confirmed with angiogram and successfully treated with coil embolization of the gastroduodenal artery. Arterial steal syndromes should be part of the broad differential when encountered with findings suggestive of an arterial complications in post-OLT patients.

Orthotopic liver transplantation (OLT) may be complicated by vascular complications in 8% to 15% of patients and are mostly of arterial origin.1 Common causes include hepatic artery thrombosis, stenosis, and pseudoaneurysms which if left untreated can result in graft necrosis leading to re-transplantation and a reported mortality rate between 11%–60%.2 Another arterial complication termed non-occlusive hepatic artery hypoperfusion syndrome has been increasingly described in the literature where blood flow through an anatomically normal hepatic artery is reduced with concurrent increased flow through another artery stemming from the celiac trunk.

Non-occlusive hepatic artery hypoperfusion syndrome occurs in roughly 0.6% to 5.9% of liver transplantations and usually presents within 60 days of surgery in over 80% of cases.3,4 The frequency of steal by artery involvement is as follows: splenic artery steal (82%–88%) and gastroduodenal artery (GDA) steal (12%–18%).4 However, the number of cases of non-occlusive hepatic artery hypoperfusion syndrome is likely underestimated due to a lack of objective diagnostic guidelines leaving the syndrome poorly characterized.3,4

Ultrasound utilizing spectral Doppler is frequently the initial imaging modality for diagnosis due to its non-invasive approach. A high arterial resistance index (greater than 0.8) may be suggestive of a non-occlusive hepatic artery hypoperfusion syndrome; however, this finding is non-specific as it is seen in acute rejection.5 Angiography can often confirm the diagnosis of splenic artery or GDA steal syndrome with angiographic features such as decreased blood flow or diminutive appearance of the common or proper hepatic arteries relative to flow in the splenic or GDA, enlarged splenic artery diameter greater than 150% of the hepatic artery, hepatic artery diastolic reversal, and delayed arterial contrast filling of the hepatic artery branches.5 There is no standardized GDA diameter threshold that suggests a steal syndrome in the literature that we are aware of. Early treatment is vital to maintain graft viability and often involves minimally-invasive approaches such as arterial embolization mainly with metallic coils. Surgery, including banding or splenectomy, is usually reserved for when the interventional approach fails.6

Here we describe a 47-year-old male who developed GDA steal syndrome after OLT and provide context to its clinical manifestations and the importance of keeping a broad differential. 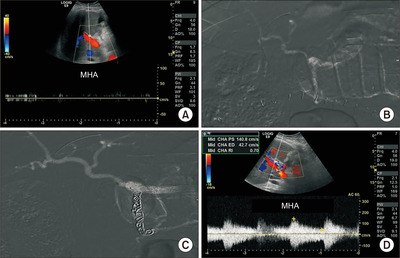 Interventional radiology was consulted for an angiography; a combination of CO2 and non-ionic contrast was used due to creatinine elevation (Table 1). During the procedure, the common hepatic artery was patent with a diminutive proper hepatic artery. Notably, the GDA had a mean diameter of 3.7 mm (range, 2.2–4.8 mm) suggesting a potential steal scenario, though no standardized arterial diameter exists for GDA steal (Fig. 1B). Due to this concern, the GDA was subsequently embolized with coils which improved hepatic artery velocities on spectral Doppler ultrasound and decreased liver enzyme levels (Fig. 1C, 1D; Table 1). The patient tolerated the procedure well and had no post-procedure complications. He was also given high dose steroids to prevent possible acute rejection syndrome. After an additional few days of uncomplicated recovery in the hospital with improvement in liver enzyme levels, he was discharged to outpatient follow-up (Table 1).

Routine spectral Doppler ultrasound approximately 2 months post-OLT showed patent vasculature with normal hepatic artery resistive indices and an increasing 5 mm dilatation in the extrahepatic biliary ducts that resolved without intervention. The patient has not had a significant complication requiring intervention during the six-month follow-up period.

Diagnosing arterial complications after liver transplantation is critical to prevent graft injury, re-transplantation, or death. Splenic and GDA steal syndrome remains an under-diagnosed obstacle due to its low incidence in addition to non-specific radiographic findings. However, similar to other OLT arterial complications it is vital to treat to prevent graft necrosis. Differentiating between the other more common complications including hepatic artery stenosis and thrombosis is difficult because they exhibit similar initial clinical presentations including elevated aminotransferases, bilirubin, gamma-glutamyl transferase.7 These findings are non-specific and are often seen in acute rejection among other post-transplant complications.5,8 Several studies suggested factors that increase risk for a hepatic artery steal syndrome including splenomegaly, splenic vessel arteriovenous fistula, superior mesenteric artery stenosis, and enlarged branches of the celiac trunk.4,9 However, the clinical picture is often obscured by chronic comorbidities in patients with end-stage liver disease.9 The majority of studies examining splenic or GDA steal syndrome use Doppler ultrasound to visualize high arterial resistance index and possible reversal of diastolic flow. CTA can be a confirmatory imaging modality with expectant findings including delayed hepatic artery filling and enlarged filling of the GDA artery.6 To our knowledge, there is no standardized GDA artery diameter that may indicate a steal syndrome.

Given the urgency to diagnose and treat steal syndromes, prophylactic treatment during the intraoperative period may be clinically warranted. Multiple studies have investigated whether intraoperative banding, ligation, or embolization of the splenic artery prevented a steal syndrome from occurring. Their results showed decreased rates of developing splenic artery steal syndrome, postoperative complications, and mortality compared to patients who did not undergo prophylactic therapy.9–11 No studies have been done in regards to GDA steal driven hypoperfusion likely due to its rarity.9–11 Due to the low incidence number, it remains questionable whether prophylactic banding, ligation, or embolization of the GDA would prove beneficial given the risks of undergoing the procedure.

GDA steal syndrome remains poorly characterized with no consensus on its pathophysiologic underpinnings. The initial prevailing theories focused on splenic artery steal where the splenic artery diverts blood flow from the hepatic artery. A minority of cases involve GDA steal. Quintini et al13 questioned the mechanism behind the steal phenomenon and subsequently theorized that increased portal venous depletion of adenosine via the hepatic artery buffer response seen after transplantation could explain the hypoperfusion. Adenosine is a vasodilator that maintains hepatic artery patency and increased washout of adenosine post-OLT promotes vasoconstriction of hepatic arteries. Saad3 later argued against the portal hyperperfusion theory observing that coil embolization of GDA steal alleviated the hepatic artery hypoperfusion without affecting portal blood flow. He later suggested a multifactorial explanation to the syndrome given the complex nature of liver transplant blood flow.

We present a case of GDA steal syndrome one week after liver transplantation which was treated with GDA coil embolization. It is vital to add arterial steal syndromes to the differential diagnosis when examining for postoperative arterial complications given their high rate of re-transplantation and morbidity if untreated. Given the syndrome’s poor characterization and lack of uniform diagnostic criteria, future studies should better examine potential risk factors for arterial steal syndromes post-OLT using imaging modalities to further characterize vessel blood flow, artery diameter, and spleen measurements prior to transplantation while comparing them to post-transplant imaging. Future investigations should involve long term follow up with patients who undergo prophylaxis or treatment using either a transcatheter or surgical approach. If such longitudinal studies suggest improved graft viability using prophylactic methods compared to treatment for GDA steal syndrome then prevention may be clinically warranted in this uncommon complication.