Our case describes a 65-year-old Japanese male who presented with painless but excessive bright red and burgundy rectal bleeding. He had been receiving a combination of hemodialysis (HD) and peritoneal dialysis (PD) for 42 months for diabetic nephropathy, as well as an anti-platelet (acetylsalicylic acid) and an anti-coagulation (warfarin) agent.

On admission the patient had an acute ill-looking appearance without abdominal pain. Resting tachycardia was observed, but his blood pressure was within the normal range. His hemoglobin level and hematocrit were 8.4 g/dL and 26.9%, respectively. His international normalized ratio value was 1.65. An abdominal computer tomography revealed an elevation of the abdominal panniculus due to PD and a study on ascites from the PD tube confirmed them to be bloody. We initially considered the possibility of rectal bleeding being induced by ischemic colitis. Because the patient refused an initial endoscopic examination, we planned to follow the clinical course of examination and treatment in a fasting state. However, the intermittent rectal bleeding ensued and the patient received blood transfusions after each bleeding episode. Upon patient agreement, we performed a colonoscopy six days after the hospital admission. The colonoscopy was performed with an endoscopic hood and water-jet system. The colonoscopy confirmed the presence of fresh blood in the entire colon, but not in the ileum. Furthermore, fresh blood and coagulation in the orifice of the appendix were observed (Fig. 1A). After washing the appendix orifice with water, we confirmed erosion of the appendiceal wall along with an exposed vessel in the appendix (Fig. 1B). The exposed vessel was concealed frequently with peristalsis (Fig. 1C). After we confirmed the position of the exposed vessel assisted by an endoscopic hood, we performed an endoscopic hemostasis procedure. At first, we placed two hemo-clips on the appendix orifice at opposite sides of the exposed vessel (Fig. 1D) and then stirred them with an endoscopic hood in order to visualize the exposed vessel clearly (Fig. 1E). Finally, we placed other two hemo-clips near the exposed vessels and carried out a complete hemostasis procedure with vessel thrombosis (Fig. 1F). A schematic view of this case is presented as Fig. 2. After this procedure, the patient was discharged from our hospital without any complications. 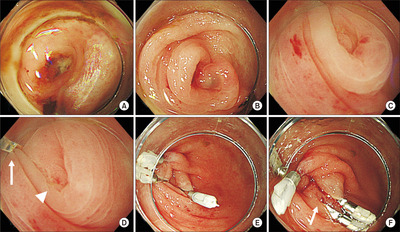 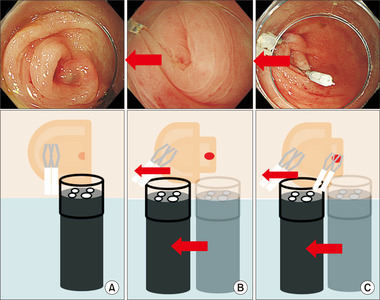 The usefulness of colonoscopy for detecting and treating LGIB was presented in retrospective studies comparing it to angiography and scintigraphy.1,2 These studies showed that the diagnosis and therapeutic intervention rate were high in the colonoscopy group but that the cost was low. Colonoscopy is a well-established and safe tool for the treatment of LGIB.

Previously, surgical treatment played an important role in the management of appendiceal bleeding. An appendectomy has been performed in most patients with localized appendiceal lesions. Despite its colonoscopic benefits, it is often challenging to locate the definite bleeding site of an appendiceal bleeding if the colonoscopy is performed in a situation of a large amount of acute bleeding. Furthermore, it is also difficult to locate the bleeding site if it bleeds intermittently or slowly, or even if it stops temporarily. Moreover, the anatomical character of the appendix makes it difficult to detect and perform interventions with an endoscopy. We reviewed 30 reported cases of appendiceal hemorrhage that were examined using a colonoscopy and bleeding from the appendiceal orifice could be identified in 24 cases (80.0%). Although appendiceal bleeding was detected, it is important to realize that it is challenging to detect a definite bleeding point and predict the bleeding etiology. The detection rate of an exposed vessel in the appendix (exposed vessel) is 2 cases3 (and our case) (6.7%).

Table 1 . Summary of the Reported and Our Case of Various Endoscopic Procedure for Appendiceal Bleeding.

We also emphasized the usefulness of endoscopic hoods and the clip-traction procedure. In order to perform a complete endoscopic hemostasis, we had to make an effort to confirm the etiology of appendiceal bleeding. In this case, we visualized the exposed vessel with erosion using a clip traction method. Hemo-clips and contraction with hemo-clips made this hemostasis procedure uncomplicated. This method is a useful tool in the treatment approach to appendiceal bleeding as well as to help determine the etiology of an unknown appendiceal disease.

In conclusion, we presented a case in which we performed an endoscopic procedure for the complete hemostasis of an appendiceal bleed using an endo-clip traction method. The colonoscopy proved to be an essential tool for its accuracy, convenience, and therapeutic potentiality. The effectiveness of an endoscopic procedure by the traction method using endoscopic clips overcomes the difficulty of diagnosis and challenges in the intervention of appendiceal bleeding.