Double pigtail plastic stents (DPTPS) are routinely placed with the lumen apposing metal stent (LAMS) during endoscopic ultrasound-guided gall bladder drainage. Several reasons are postulated for this practice. This case report highlights a previously unreported benefit from use of DPTPS within LAMS.

We wish to highlight previously unreported considerations for placement of double pig-tail plastic stent within the LAMS.

A 92-year-old female with cholelithiasis and recurrent cholecystitis, who was managed with a chronic in-dwelling percutaneous cholecystostomy tube, presented for internalization of gallbladder drainage. Prior tube cholangiograms had demonstrated persistent cystic duct obstruction and patient was deemed a poor surgical candidate. She underwent EUS-guided cholecystogastrostomy with a 10 mm × 10 mm Axios (Boston Scientific, Marlborough, MA, USA) LAMS with a cautery enhanced delivery system. Immediate post deployment fluoroscopic images showed spontaneous drainage of contrast into the small bowel (Fig. 1). Post stent deployment, moderate bleeding was noted at the LAMS site (estimated blood loss less than 200 mL, no blood transfusion required). Hemostasis was achieved with circumferential injection of dilute epinephrine solution around the gastric aspect of the LAMS followed by balloon tamponade of the inner lumen (at 10 mm diameter for 1 minute) (Fig. 2). A 7-Fr 4-cm DPTPS was then placed across the LAMS under direct endoscopic and fluoroscopic guidance (Fig. 3). During the endoscopic procedure, the patient underwent endotracheal intubation due to concerns for aspiration. She was weaned off the respirator over the next 48 hours. Tube cholangiogram following extubation showed only a wisp of contrast draining into the stomach along the DPTPS (Fig. 4). The patient continued to do well clinically and liver chemistry was normal. The percutaneous catheter was continually capped and the tube study was repeated 3 days later (Fig. 5). This study showed spontaneous drainage of contrast into the stomach and small bowel and the percutaneous catheter was removed. 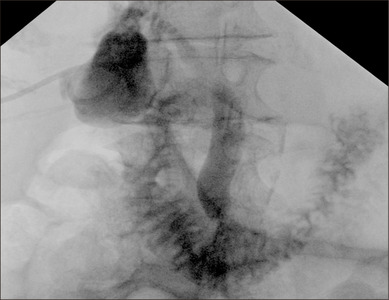 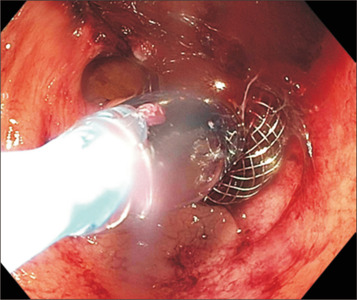 Figure 2. Balloon dilation of lumen apposing metal stent (LAMS) after circumferential dilute epinephrine injection (blood and blood clots noted above the LAMS and pylorus seen to the upper left of the LAMS). 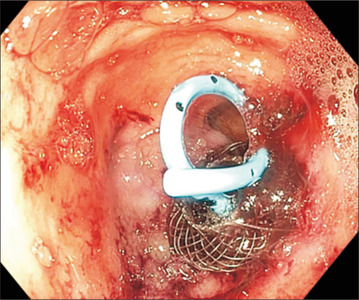 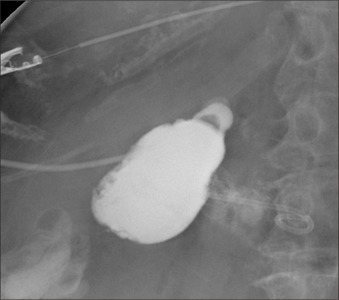 Figure 4. Wisp of contrast along the double pigtail plastic stent within the lumen apposing metal stent. 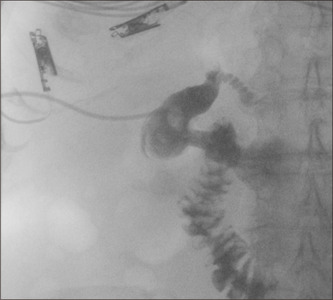 EUS-guided gallbladder drainage using LAMS to create a cholecystoenterostomy is increasingly used in in poor surgical candidates with acute and recurrent cholecystitis.1–3 It is common practice to deploy DPTPS within the LAMS.4,5 The pig tail stents may help prevent stent occlusion of the LAMS with food particles (and thereby prevent cholecystitis). They may also help prevent tissue hyperplasia due to LAMS related pressure at either end.6 There is at least one case report of DPTPS placement inside the LAMS to mitigate cholangitis after LAMS assisted choledocho-duodenosotmy.7 Other theoretical considerations include reduction in risk of migration of LAMS and reduction in risk of mucosal bleeding from abrasion of gallbladder tissue against the LAMS.5

The overall incidence of procedure related adverse events (AE) in EUS GBD using LAMS is about 11% with intra-procedural AE incidence of 5%.3 These include bleeding, perforation, peritonitis, hemoperitoneum, pneumoperitoneum, post-procedural pain. The overall AE profile appears to be similar with both trans-duodenal and trans-gastric approach.8 However, in a small prospective study by Teoh et al,8 the incidence of intra-procedural AE appeared to be higher with trans-gastric approach, but the difference did not reach statistical significance. Further all the reported intra-procedural AE occurred in patients undergoing cold Axios stent placement using trans-gastric approach. Bleeding during EUS GBD is presumably related to disruption of mural penetrating or peri-luminal blood vessels. There is at least one case report of significant gastrointestinal bleeding related to EUS GBD that resulted in mal-deployment of the Axios stent.9 It appeared to be related to an arteriovenous malformation in the gallbladder wall. The situation was mitigated by removing the mal-deployed stent and placement of a new Axios stent to achieve tamponade effect on the blood vessels as well as drainage of gallbladder. In our patient, no obvious blood vessels were noted in the access path during Doppler interrogation prior to EUS GBD, that could have resulted in significant bleeding. We used a trans-gastric approach and it is possible that bleeding could have been related to larger penetrating mural blood vessels compared to the trans-duodenal approach. Although supportive data is lacking, the cautery time during deployment of Hot Axios (cautery enhanced) stent may be relevant to achieving adequate hemostasis of bleeding from penetrating mural blood vessels. In our patient, balloon dilation of the deployed Axios stent presumably helped maximize the tamponade effect on the penetrating blood vessels and the circumferential injection of dilute epinephrine solution provided vasoconstriction necessary to achieve hemostasis. No lavage of the gallbladder contents was performed prior to placing DPTPS within the LAMS. The author hypothesizes that transient occlusion of the internal lumen of the LAMS due to blood clots (which subsequently dissolved) could have occurred accounting for the minimal drainage of contrast noted in Fig. 4. Lumen occlusion of the LAMS due to large gallstone noted in the cholangiogram is less likely as the indwelling DPTPS would have prevented this.

It is also conceivable that lavage of gallbladder contents prior to placement of DPTPS with the LAMS may have helped clear blood clots.