Mirizzi syndrome: A retrospective analysis of 84 patients from a single center

Background: There is a paucity of literature regarding the prevalence of Mirizzi syndrome (MS) in patients undergoing endoscopic retrograde cholangiopancreatography (ERCP) for obstructive jaundice. We aimed to describe the clinical presentation; laboratory, imaging, and ERCP findings; and surgical management of patients with MS at our center.
Methods: A retrospective review was performed of the medical records of 3,852 consecutive patients who underwent ERCP between January 2010 to December 2019 at our center.
Results: MS was diagnosed in 84 (2.2%) of the patients who underwent ERCP, with 45 male and 39 female patients. Jaundice was the most common symptom (100%) followed by abdominal pain (91.6%). Leukocytosis and altered liver function tests were noted in all our patients. Although most of our patients had one or more pre-procedure imaging studies, MS was confirmed and subclassified based on cholangiographic and intraoperative findings. There were 11 post-cholecystectomy MS patients who opted for endoscopic therapy with repeated biliary stenting. Among the remaining 73 patients, 48 with type I and 21 with type II MS underwent open cholecystectomy, 4 with type III MS received cholecystectomy and choledochoduodenostomy, and another 4 patients with type II MS underwent subtotal cholecystectomy and choledochoplasty. Associated cystic duct abnormalities were noted in 20.2% of patients. Bile duct injuries occurred in 3 patients during an attempted laparoscopic procedure; however, no mortality was reported.
Conclusion: Although it is preferable to diagnose MS preoperatively, a preoperative diagnosis is seldom possible. ERCP is both a diagnostic and therapeutic procedure of choice before definitive surgery and helps to identify any associated cystic duct anomalies in these patients.

Although Mirizzi syndrome (MS) was first described in the early 1900s, it was not until 1948 that Pablo Luis Mirizzi, an Argentinian surgeon, gave his name to this uncommon complication of long-standing cholelithiasis characterized by common hepatic duct (CHD) and/or common bile duct (CBD) obstruction secondary to mechanical compression by an impacted calculus at the gallbladder neck or within the cystic duct.1 It is estimated to occur in approximately 0.05% to 4% of all cholecystectomies performed.2–4 The impacted gallstone results in an intense inflammatory reaction, which in turn favors the formation of adhesions and fibrosis around Calot’s triangle, posing a formidable challenge to the operating surgeon. In 1982, McSherry et al5 classified MS into two types based on endoscopic retrograde cholangiopancreatography (ERCP) findings; in the first type, extrinsic compression of the CHD is caused by a calculus in the cystic duct or Hartmann’s pouch, whereas in the second type, there is either partial or complete invasion of the calculus into the CBD resulting in cholecystocholedochal fistula. In 1989, Csendes et al6 proposed further subclassifying MS patients into four subtypes: type I with external compression of the CHD; type II with a cholecystobiliary fistula and erosion of less than one-third of the circumference of the bile duct; type III with a fistula involving up to two-thirds of the duct circumference; and type IV with complete destruction of the bile duct. Given its low incidence, limited preoperative recognition, association with cystic duct abnormalities, and the altered anatomy caused by the intense inflammatory reaction around the Calot’s triangle, MS causes significant morbidity secondary to iatrogenic bile duct injuries, with an overall conversion rate from laparoscopic cholecystectomy to an open procedure ranging from 31.7% to 100%.7

The aim of our study was to describe the clinical presentation; laboratory, imaging, and cholangiographic findings; and surgical management of MS patients at St. John’s Medical College Hospital.

This retrospective study was exempted from review by the Ethics Committee of the St. John’s Medical College Hospital. From our hospital database, we retrospectively retrieved the medical records of 3,852 consecutive patients who underwent ERCP for obstructive jaundice between January 2010 and December 2019 at our center and identified 84 patients based on imaging, ERCP, and intraoperative features consistent with MS. Patients were further subgrouped using the Csendes classification for MS.6 Data were collected on patient demographics, clinical presentation, laboratory and imaging findings, therapeutic interventions, and post-surgical complications, if any. The retrieved data were analyzed using appropriate statistical methods (mean, median, and standard deviation [SD]).

A total of 3,852 ERCP procedures were performed for various causes of obstructive jaundice during the study period extending from January 2010 to December 2019. MS was diagnosed in 84 (2.2%) patients who underwent ERCP. The mean (± SD) age of the study population was 49.6 years (± 15.77 years; range 21–83 years) with 45 male and 39 female patients. Jaundice (100%) was the most common symptom noted in our patients, followed by abdominal pain (91.6%). While 52 patients presented with features of cholangitis (the triad of abdominal pain, fever, and jaundice), seven patients complained of jaundice and pruritus (Table 1). Less common symptoms included anorexia, vomiting, abdominal bloating, and hiccups, which were noted in various combinations with the above symptoms.

Table 1 . Demographic and Clinical Data of the Study Population.

Abnormal liver function tests (LFTs) in the form of hyperbilirubinemia, transaminitis, and/or raised alkaline phosphatase and gamma glutamyltranspeptidase (GGT) levels, along with leukocytosis, was noted in all our patients on biochemical testing (Table 2). Overall, 17 patients were diagnosed with MS on abdominal ultrasonography, 28 on contrast-enhanced computed tomography (CECT) of the abdomen, 14 on magnetic resonance cholangiopancreatography (MRCP), and two on endoscopic ultrasonography. The remaining 23 patients were diagnosed as having MS based on choloangiographic findings. Definitive surgery was performed in 73 patients, while 11 patients with post-cholecystectomy MS (PCMS) preferred repeated endoscopic biliary stenting. Of note, although the diagnosis of MS in a majority of our patients was made preoperatively with a combination of imaging and ERCP findings, MS was confirmed and the subgrouping was done in all our patients based on the intraoperative findings except in the 11 PCMS patients who opted for repeated endoscopic therapy and biliary stenting.

Table 2 . Laboratory Abnormalities in the Study Population with Mirizzi Syndrome.

Table 3 . Prevalence of Mirizzi Syndrome Subtypes (Based on the Csendes Classification) in Our Study Population.

Patients with MS typically present with the clinical features of extrahepatic biliary obstruction. Although there are no pathognomonic clinical, laboratory, or imaging features of MS, obstructive jaundice is the most common presentation (50%–100%) and is often accompanied by pain in the right upper quadrant (50%–100%) or epigastric pain. The presence of fever with chills and rigors suggests cholangitis. A certain preoperative diagnosis can only be achieved in 8% to 63.4% of cases, since MS is easily confused with choledocholithiasis, immunoglobulin (Ig) G4-related sclerosing cholangitis, and hilar cholangiocarcinoma given the intense inflammatory adhesions that occur in Calot’s triangle.7–9 Patients inadvertently referred to surgery often sustain bile duct injuries when laparoscopic cholecystectomy is attempted by a naïve surgeon.10 The situation is further complicated given the fact that a considerable number of patients with MS have associated cystic duct anomalies.11 While LFTs often reveal an obstructive pattern with high levels of bilirubin, transaminitis, and elevated alkaline phosphatase and GGT levels, the diagnosis of MS is based on clinical features combined with a high index of suspicion and supplemented by radiologic imaging and ERCP findings.11,12 Although ERCP is regarded as the gold standard for the diagnosis of MS, MRCP is the preferred imaging modality because it is non-invasive.

The prevalence of MS is estimated to be around 1.5% to 7% in those with symptomatic gallstones, 0.06% to 5.7% in patients during cholecystectomy, and in 1.07% in those undergoing ERCP.6,12–14 The prevalence of MS in our cohort of patients undergoing ERCP was higher at 2.2%. MS usually presents in elderly individuals, with a mean age that varies between 53 to 70 years, and 70% of MS patients have been reported to be female.3,15–17 However, a study by Tan et al18 reported a male preponderance (66.7%) in their series of 24 cases, as did another study by Al-Akeely et al,19 which showed a male-to-female ratio of 58.8% to 41.2%. Our present study concurs with the above two studies, as there was a male preponderance (45 male and 39 female patients. The mean (±SD) age of our study cohort was 49.6 ± 15.77 years (range, 21–83 years). The clinical presentation of MS varies from asymptomatic to cholangitis and septic shock. Concurrent with other studies, jaundice and abdominal pain were universal or near-universal findings in our series (100% and 91.6%, respectively). Cholangitis was noted in 62% of patients, while pain and jaundice were seen in 29.7% of patients and 8.3% of patients presented with jaundice and pruritus. Anorexia, nausea, vomiting, abdominal bloating, and hiccups were noted in combination with the above symptoms. The high incidence of cholangitis in our study could have been due to a delayed referral of these patients to our center.

The intense inflammatory reaction accompanied by elevated CA19-9 levels that sometimes occurs in patients with MS is often mistaken for advanced hilar cholangiocarcinoma.20 Two of our patients were erroneously diagnosed with inoperable hilar cholangiocarcinoma based on CECT and MRCP findings. Along with an elevated CA19-9 level, both these patients had such intense inflammatory reaction around Calot’s triangle and the subhepatic space that they were misdiagnosed on both CT and MRCP as having a malignant hilar stricture with vascular invasion around the porta hepatis and were referred for palliative ERCP (Fig. 1). Fortunately, following ERCP and biliary stenting, there was marked reduction in the inflammatory mass around the biliary tree and the subhepatic space. The previous diagnosis was revised to MS on repeat MRCP imaging, and both patients underwent successful open cholecystectomy. 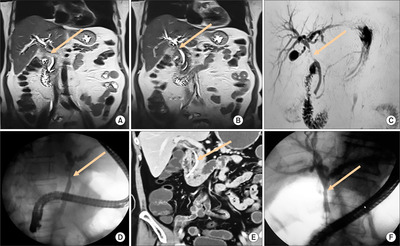 The reported incidence of different types of MS subtypes according to the Csendes classification is as follows: type I (the most common), 10.5%–78%; type II, 15%–41%; type III, 3%–44%; and type IV, 1%–4%. Type V (which includes the presence of a cholecystoenteric fistula together with any other type of MS) can be present in up to 29% of patients.6 This distribution was reflected in our study with type I MS being reported in 69%, type II in 26%, and type III in 4.7% of the patients.

The main limitations of our study were its retrospective nature and the nonavailability of cholangioscopy, electrohydraulic lithotripsy, or extracorporeal shock wave lithotripsy at our center, although these methods have been used effectively in some studies for the treatment of difficult bile duct stones refractory to conventional extraction techniques.32

In conclusion, although diagnosing MS preoperatively is ideal, a preoperative diagnosis is seldom possible even with advanced imaging techniques, and MS is often mistaken for hilar cholangiocarcinoma, carcinoma gallbladder causing hilar block, and IgG4-related sclerosing cholangitis. A high index of suspicion should be exercised, particularly in patients with a known history of cholelithiasis. Although surgery is the definitive treatment for MS, ERCP—in addition to its therapeutic role of clearing bile duct calculi and placement of a biliary stent—helps in the intraoperative identification of the CBD, thus reducing bile duct injuries and associated morbidity and mortality. It is also prudent for the operating surgeon to anticipate anatomic variations of the cystic duct in MS patients, necessitating meticulous dissection around Calot’s triangle.