Liver venous deprivation (LVD) is considered to be a safe and effective method that induces more rapid and important liver hypertrophy before major hepatectomy in comparison with portal vein embolization (PVE) alone. Bleeding complications after LVD or PVE are rare, but can be a life-threatening event. Herein, we report a case of perihepatic and extended subcapsular hematoma of the liver after LVD. Transarterial embolization was performed using gelfoam to control the hemorrhage; however, the patient developed irreversible liver failure and passed away after 38 days of treatment. In patients with LVD or PVE, severe post-procedural bleeding poses a substantial challenge for treatment. Arterial embolization should be carefully considered to avoid liver failure and even death, regardless of whether temporary embolization is used.

In recent years, simultaneous portohepatic vein embolization, also termed liver venous deprivation (LVD), has been applied at many institutions as an alternative to portal vein embolization (PVE) for the purpose of hepatic hypertrophy in patients with inadequate future liver remnant (FLR) who require major hepatectomy.1–7 LVD has been reported to have similar safety to PVE, but is more rapid and leads to a higher degree of liver hypertrophy. According to the published literature, no cases related to serious complications after LVD was reported.5,8 Herein, we describe a patient presenting with important perihepatic and subcapsular hematoma of the liver after LVD, which was treated by transarterial embolization (TAE). Unfortunately, the patient developed irreversible liver failure and passed away after 38 days of treatment.

A 56-year-old male patient with a history of diabetes and chronic hepatitis B was diagnosed with hepatocellular carcinoma (HCC). He weighed 61 kg. Computed tomography (CT) showed a 5 cm × 7 cm liver mass at segment V-VI, with hyperenhancement in the arterial phase followed by a wash-out in the portal venous phase, compatible with HCC. Blood tests showed the following results: hemoglobin, 139 g/L; hematocrit, 0.408 L/L; alpha-fetoprotein, 153.9 ng/mL; aspartate aminotransferase, 44 U/L, alanine aminotransferase, 30 U/L; total bilirubin, of 35.4 μmol/L, direct bilirubin of 7.3 μmol/L, platelet count, 147 × 109; and prothrombin, 87%. His Child-Pugh score was 6. Right hepatectomy was indicated but the FLR volume was 361 mL, which was not enough for a major liver resection. Due to the superficial location and exophytic growth of the tumor, transarterial chemoembolization (TACE) was planned prior to surgery to reduce the risk of tumor rupture and tumor progression while waiting for hepatectomy, and LVD was performed 7 days after TACE.

The segment VIII portal venous branch was punctured using an angiocath needle (16 G × 5.25”; AngiocathTM BD, Sandy, UT, USA). Direct portography showed a modal anatomic type. The right portal vein was then embolized using an Amplatzer Vascular Plug I (8 mm × 14 mm) and a 6 mL mixture of -butyl-2-cyanoacrylate and lipiodol (1:3 ratio). The puncture tract was embolized by gelfoam. Subsequently, the right hepatic vein was selected and embolized by an Amplatzer Vascular Plug II (16 mm × 20 mm) the right internal jugular venous route (Fig. 1B). At the end of the procedure, the patient presented with right upper quadrant pain. Abdominal ultrasonography showed a hepatic subcapsular hematoma with a thickness of 15 mm.

Figure 1. (A) Selective anterior branch portography via the transhepatic route (black arrowheads) shows a subcapsular hematoma at the puncture site (black arrows). (B) Final venography after embolizing the right hepatic vein by an Amplatzer Vascular Plug II (16 mm × 20 mm; white arrow). The white arrowheads are glue and an Amplatzer Vascular Plug I (8 mm × 14 mm), which were used to embolize the right portal vein.

We immediately reviewed the previous digital subtraction angiography (DSA) images and found that the hematoma had appeared on selective anterior portography but was small (Fig. 1A). The patient’s pulse and blood pressure at that time were 91 bpm and 113/69 mmHg. One hour later, his pain became worse and his pulse and blood pressure were 115 bpm and 90/60 mmHg, respectively. An abdominal CT scan was immediately performed and showed an important perihepatic and subcapsular hematoma measuring 25 mm in thickness and an intraparenchymal hematoma measuring 40 mm × 54 mm along with the portal vein access (Fig. 2A, 2B). No active contrast extravasation was found on CT on the arterial, venous or delayed phases. His hemoglobin level had decreased from 139 to 96 g/L with a hematocrit of 0.359. These findings suggested a bleeding complication following LVD. After multidisciplinary consultation, hepatic angiography was expeditiously performed. On angiography, although no active contrast extravasation was seen (Fig. 2C), temporary selective embolization of the anterior hepatic artery was performed with gelfoam particles of approximately 1 mm × 1 mm × 1 mm in size by cutting with scissors (Fig. 2D). After the embolization, ultrasonography revealed an increased size of the perihepatic hematoma. Embolization of the posterior hepatic artery by the same gelfoam particles was additionally performed. 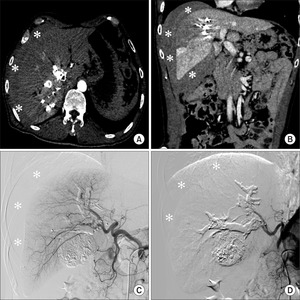 After the procedure, no further blood loss was noted. Unfortunately, the patient presented acute hepatic necrosis and severe liver failure from day 2, which was promptly treated by intensive medical therapy. Plasma exchange was performed every 3 days starting on day 5, but severe liver failure could not be avoided, and the patient passed away at day 38 post-intervention.

LVD has been applied for the last few years as a good replacement for PVE alone to extend major liver resection.1,–4,8,9 The rate of procedure-related complications are similar in PVE and LVD, and most of these complications are associated with the transhepatic puncture tract.1–4,8,9 Regarding LVD, with limited available reports in recent years, no deaths or serious complications associated with LVD have been reported.5,8 In the study of Laurent et al,3 one patient who had a hemoperitoneum after LVD without requiring specific treatment. Regarding PVE, the rates of mortality and major complications related to PVE are very low.10–13 The meta-analysis of van Lienden et al10 synthesized data from 44 articles including 1,791 patients, and reported showed rates of approximately 0.1% and 0.4%, respectively, for mortality and morbidity after PVE. In another meta-analysis, Abulkhir et al11 reported that in 1,088 patients receiving PVE, the overall morbidity rate was 2.2 % and with no mortality. Lee et al13 described 2 cases with Klatskin tumor (classified as Bismuth–Corlette type IV) who died after PVE due to sepsis.

Hemorrhage is known to be the most common complication of the PVE, and it normally presents with hemobilia, subcapsular hematoma, or hemoperitoneum.14 In most cases, the bleeding site appears along the puncture tract.15 In the present case, when reviewing the previous DSA images, we found that the subcapsular hematoma at the puncture site was visible on selective anterior portography, although it was small. In this case, on CT, we did not determine the source of bleeding from the portal vein or hepatic artery, although the lesion continued to increase significantly in size. When no positive finding is seen on hepatic angiography, it would be better to look for another source of bleeding before performing TAE. Portography through the left portal venous or transsplenic approach would be valuable for diagnosing portal bleeding and could make it possible to perform additional right PVE if necessary. This solution is more appropriate than TAE for reducing liver perfusion.

Many authors have recommended that embolization of the puncture tract is the key to avoiding hemorrhage events. In our patient, puncture tract embolization using gelfoam might not have been as effective as expected. Many authors have proposed using the same glue mixture as PVE for tract embolization, while some others do not perform embolization.2,16,–18 While conservative or delayed treatment is possible in cases of mild and moderate hemorrhage, TAE is the most effective treatment for massive bleeding.15 However, applying TAE for the treatment of bleeding after PVE or LVD may lead to severe consequences. In fact, in patients requiring PVE or LVD for hepatic hypertrophy, the FLR volume is not sufficient to ensure normal liver function. After PVE or LVD, the embolized hepatic lobe is perfused only from arterial sources. As discussed by many authors, perfusion from the hepatic artery source after PVE in patients who will undergo future liver resection helps to maintain liver function while waiting for hypertrophy of the FLR.19 That is, the excessive hepatic artery embolization immediately after PVE probably causes hepatic ischemia of the corresponding portion with a high risk of liver failure.

In this case, although conservative treatment seemed to be ineffective when the patient’s hemodynamics showed instability at 1 hour post-procedure, TAE was probably not a good choice and was overused, as all right hepatic artery branches were occluded (Fig. 2D), even though only gelfoam was used. This was the reason for the patient’s acute hepatic necrosis and irreversible liver failure. To avoid this negative result, the indications for TAE need to be very carefully considered and a super-selective technique should be applied.

Overall, from this case, we present several recommendations. Firstly, although PVE or LVD in preparation for major hepatectomy is considered a safe technique, fatal procedure-related events can still occur. Secondly, the embolization of puncture tract needs to be performed by permanent embolic agents, such as glue, to avoid hemorrhage complications. Massive bleeding after PVE or LVD, if it occurs, is a challenge for treatment; therefore, the indications for TAE hemostasis should be considered very carefully, and a super-selective technique should be used. Lastly, interventionists should always keep in mind that irreversible liver failure can occur if TAE is overused immediately after PVE or LVD despite the use of temporary embolic agents.