Yunho Jung and Chang-Il Kwon contributed equally to this work as first authors.

Background: The submucosal lifting gel (Cook Medical Inc., Winston-Salem, NC, USA) is a novel injectate for submucosal lifting of gastrointestinal lesions. The aim of this study was to evaluate the efficacy of the novel submucosal lifting gel for performing endoscopic mucosal resection after precutting (EMR-P) in large gastric lesions.
Methods: A total of 31 artificial lesions were created on body of stomach by electrocautery marking with endoscopic ruler in five live micro-pigs. Three different groups were randomly assigned by the size of artificial lesion such as 3 cm (group 1, 11 cases), 3.5 cm (group 2, 10 cases), and 4 cm (group 3, 10 cases) in diameter. Then EMR-P was performed after injection the lifting gel sufficient unto submucosal layer. Independent observer recorded circumferential resection time, submucosal injection time, injection amount, total procedure time, en bloc and perforation rate.
Results: The mean circumferential resection time was significantly longer in the group 3 in comparison with group 1 and 2 (6.7 ± 1.7 min vs 4.2 ± 1.4 min, P < 0.001 and 4.7 ± 1.5 min, P = 0.004). The mean total procedure time and amount of injection were significant difference between three groups (9.6 ± 2.2 min vs 12.9 ± 2.6 min vs 17.4 ± 2.2 min, P < 0.01) (5.2 ± 1.1 mL vs 6.9 ± 1.4 mL vs 9.3 ± 3.0 mL, P = 0.02). The en bloc rate of each group was 90.9% (10/11), 60.0% (6/10), and 50.0% (5/10) in the group 1, 2, and 3 respectively. There was a perforation during circumferential cutting in group 2.
Conclusion: In a porcine model, a new submucosal lifting gel seems to improve the en bloc rate for performing EMR-P in large gastric lesions, especially 3 cm in diameter.

Endoscopic submucosal dissection (ESD) is the effective therapeutic technique for precancerous lesions. This technique has become popular in Korea and Japan due to the advantages such as a potential for a high rate of resection regardless of tumor size, leading to a more precise histological evaluation of the specimen and a low recurrence rate at long-term follow-up.1,2 However, it usually requires long procedure time and learning curve, because of a technically difficulty.3 In addition, it can frequently cause serious complications such as significant bleeding or perforation.4,5 Therefore, this technique is hard to learn in the beginning and more difficult to learn especially in Western country because of a relatively low prevalence rate of stomach cancer. These are the reasons why various researches have been tried and tested.

Recently, submucosal lifting gel (Cook Medical Inc., Winston-Salem, NC, USA) has been demonstrated for submucosal lift of polyps or other gastrointestinal lesions prior to excision. The gel has been proven to be an effective lifting solution to facilitate tissue resection by maintaining a long-lasting submucosal cushion.6 Also, several studies were demonstrated about the function of auto-dissection of gastric submucosal layer.7,8 We expected this gel could improve the rate of endoscopic mucosal resection after precutting (EMR-P) in compare with using conventional injection materials because it could enhance the separation of submucosal layer from proper muscle layer due to high viscosity. Also, the auto-dissection might be help for dissection by snare. However, there was no study about performing EMR-P using the submucosal lifting gel. Therefore, the aim of this study was to evaluate the advantage of submucosal lifting gel for performing EMR-P in large gastric lesions.

This study was designed as a prospective, controlled, animal, and pilot study. This animal study was conducted at a specific animal research institution under the granting from the National Center of Efficacy Evaluation for the Development of Health Products Targeting Digestive Disorders (Pyeongtaek, Korea) projected of the Ministry of Health and Welfare, Korea. Approval of this study was obtained from animal care committee (MK-IACUC: 130905-001) before study commencement.

Standardized, artificial lesions of 3 cm, 3.5 cm, and 4 cm in diameter were created at the greater curvature of the stomach body where the endoscope can reach easily and naturally by electro-cautery marking with endoscopic ruler in five live micro-pigs (Sus scrofa; mean age 14 months, mean body weight 30.1 kg) (Fig. 1).

Figure 1. An artificial lesion was created. (A) By electro-cautery marking. (B) With endoscopic ruler.

A total of 31 endoscopic procedures were performed by 2 advanced endoscopists (more than 100 cases of stomach or colon ESD). The endoscopists and type of groups were determined randomly by grouped randomized selection.

Circumferential cutting for the lesion

A mixed solution (a hypertonic saline solution mixed with diluted epinephrine and traces of indigo carmine) was injected for lifting the mucosal and submucosal layer. Then, circumferential cutting was performed with conventional knife such as dual knife and IT-knife2 (Olympus Medical Systems Corp.).

Resection the lesion and assessment

Then, the lesions were resected using a 30 mm oval-shaped disposable electrosurgical snare (Olympus Medical Systems Corp.). After we retrieved the excised lesions, the specimens were inspected to determine the resection status. The specimens were spread and pinned on flat, rubber board immediately after resection. The diameters (largest and perpendicular diameter) of the specimens were measured. Independent observer recorded circumferential resection time, submucosal gel injection time, injection amount; total procedure time and perforation rate (Fig. 3).

Figure 3. (A) The lesion was resected by a 30 mm oval-shaped snare after circumferential precutting. (B) Iatrogenic ulcer was carefully assessed. (C) Gross examination was performed after pinning the specimen on the rubber board immediately after resection.

Data were analyzed by using SPSS software ver. 18.0 (IBM Corp., Armonk, NY, USA). Statistical comparisons were made between the groups by using one-way ANOVA test and statistical significance was defined as < 0.05.

Table 1 . The Overall Result of the EMR-P Using a New Submucosal Lifting Gel. 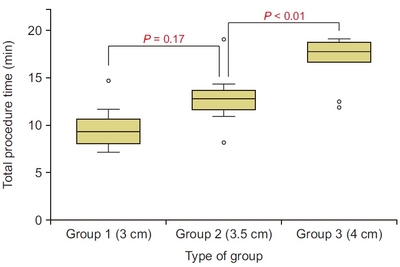 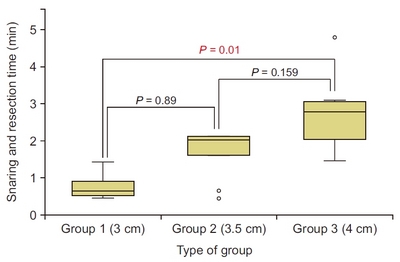 Figure 5. The results of snaring and resection time. 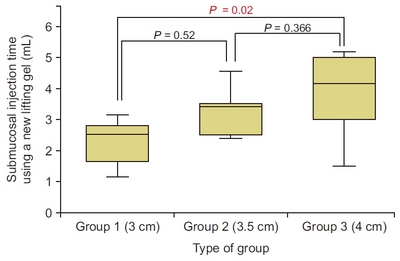 EMR is one of the most common endoscopic techniques for resecting superficial lesions of esophagus, stomach or colon because of its simplicity and safety. Various technique of EMR such as ligation-EMR, cap-EMR, and strip biopsy EMR have been developed. With these conventional techniques, the mean maximal resection size of one-piece resection is about 10–15 mm range.9–13

Limiting in size of obtaining the specimen using these technique, EMR-P method, in which lesions are resected using a snare after circumferential precutting, has been developed. The resection rates of the EMR-P technique are 82% for lesions of 10 mm or less, 54%–75% for those between 11 and 20 mm, 14%–28% for those over 20 mm.11,14,15 However, this technique also is not reliable for lesions greater than 20 mm in diameter because of the difficulty of capturing and effectively ligating the significant amount of submucosal tissue in these lesions, even after successful circumferential precutting.11,15

Various submucosal lifting solutions have been developed for preventing perforation and improving resection. Hypertonic saline, dextrose water, glycerin solution, and sodium hyaluronate have been used to maintain a sufficiently thick submucosal layer by endoscopic injection of fluid into the submucosal. Recently a thiol compound called mesna which is acting by chemically softening the connective tissue was demonstrated substantially reduced the procedural challenges associated with gastric ESD.16 However, there is a lack of data about it.

A novel submucosal lifting gel which consists of a proprietary combination of known biocompatible components has been tested for biocompatibility and was shown to be non-toxic and a long-lasting submucosal cushion. In addition, it was recently approved by the U.S. Food and Drug Administration for human use.6,8

We believed high viscosity material could lift the mucosal lesion more than low viscosity by filling of submucosal layer. Therefore, we hypothesized the lifting gel can maximize the lifting and separating of the mucosal lesions from proper muscle layer rather than other injection materials including hyaluronic acid. Also, we focused the tissue dissecting properties. Several researches introduced the auto-dissection function.7,8 They showed that there was no further need to carry out any submucosal dissection using a needle knife and no gastric submucosal fibers were visible in any pig after submucosal injection of the lifting gel.7,8 For these reasons, we expected that these advantages could improve the result of the rate of EMR-P after injection of the submucosal lifting gel.

There were several limitations in this study. Other injection materials were not compared in same condition during performing EMR-P and this study was small size of animal study.

In conclusion, the submucosal lifting gel seems to improve the rate for performing EMR-P in large gastric lesions, especially 3 cm in diameter, in a porcine model.