Benign afferent loop obstruction (ALO) is a complication that occurs after general surgery making Roux-en-Y or Billroth-II reconstruction and has typically been treated surgically. However, the surgery is difficult to conduct in about 25% of cases due to comorbidity and nonoperative management has been attempted. Here, we report two cases of benign ALO that were treated with percutaneous transhepatic afferent loop balloon dilatation and indwelling catheter, including one case with no improvement after surgery.

Afferent loop obstruction (ALO) is one of the complications that occurs after general surgery making Roux-en-Y or Billroth-II reconstruction, with an incidence of 0.2% to 13%.1 Its original treatment differs depending on whether the cause was benign or malignant, and the treatment conducted in benign cases is typically surgical, such as adhesiolysis, jejunojejunostomy with Braun procedure, or Roux-en-Y conversion; malignant cases are typically treated using radiologic percutaneous transhepatic intervention or endoscopy.2 However, surgery is often difficult due to comorbidity or underlying condition, even in benign cases, so there have been efforts to use non-surgical approaches in treatment.3 Here, we report two cases where benign ALO was treated using transhepatic ballooning and indwelling catheter, including one case with no improvement after surgery. 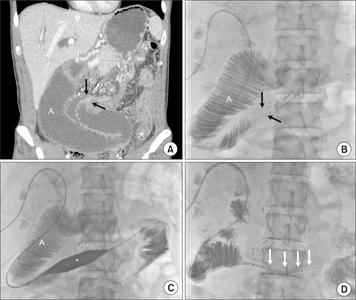 A 65-year-old male with hypertension and resectable mid-common bile duct cancer underwent hybrid robotic hilar resection with Roux-en-Y choledochojejunostomy, hepaticojejunostomy, and duodenojejunostomy. The patient visited the emergency room for biliary vomiting lasting 3 days and CT was diagnosed with jejunal loop obstruction due to adhesion and combined cholangiohepatitis (Fig. 2A). The total bilirubin was 5.0 mg/dL. After hospitalization, PTD was conducted and decompression was induced for 5 days, followed by dilatation of the stricture site with a 20-mm × 4-cm ATLAS Balloon (Fig. 2C). Subsequently, a 12-Fr pigtail catheter (Dawson–Mueller drainage catheter; Cook Medical Inc.) with hand-made sideholes was passed through the stricture site (Fig. 2D). The total bilirubin level decreased to 0.5 mg/dL. Clamping was performed after confirming that there was no catheter migration a week later and was removed two days later. After discharge, the patient’s total bilirubin level was reviewed in an outpatient clinic and remained at 0.5 mg/dL. No adverse events occurred during treatment period and ALO did not recur for a follow-up period of 3 months 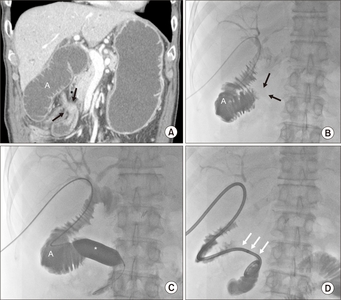 Conventional treatment of benign ALO has typically been surgery, such as adhesiolysis, jejunojejunostomy with Braun procedure, or Roux-en-Y conversion.2 However, it can often be difficult due to comorbidity such as old age, poor general condition, peritoneal adhesion, and the presence of other tumors. According to Moriura et al,4 surgery was only possible in about 75% of cases. In addition, even if surgery is performed, as in case 1, ALO may not be effectively treated. Therefore, transhepatic or endoscopic intervention have been attempted as a complementary treatment or replacement for surgery.

Non-surgical treatments include percutaneous transhepatic and endoscopic approaches. PTD, direct percutaneous tube duodenal enterostomy and self-expanding metal stent placement are examples of a percutaneous approach. Endoscopic nasogastric tube insertion is an example of an endoscopic approach.5 Among the treatments mentioned, metallic stent placement is only one to directly treat the obstruction point; however, patency typically lasts less than a year according to one report, about 9 months.6 It can be used for only malignant ALO cases with a short life expectancy, On the other hand, it should not be used for benign ALO cases with a long life expectancy. Other treatments are those that do not directly manipulate the obstruction point and can only drain and wait for release. Radiologcally, gastrointestinal balloon dilatation has been performed for various obstructive strictures of the upper gastrointestinal tract and has the advantage of safely releasing the stricture, leaving no residual material such as a stent, and can be repeated multiple times.7 Balloon dilatation for benign ALO has not been reported thus far, but our two cases showed its possibility of safe and successful use.

According to Blouhos et al,2 the causes of benign ALO are as follows: 1) post-operative adhesion, 2) internal herniation or intussusception of afferent loop, and 3) scarring due to repeated inflammation and ulceration. In addition, according to the endoscopic findings of Cao et al,5 mucosal inflammatory edema was observed in benign ALO, which may be responsible for the occurrence of stenosis and intussusception. The author explained that postoperative anatomical changes may have been caused by erosion due to the gastric and duodenal juice, which led to mucosal injury and inflammation of the afferent loop.5 In the two cases above, after balloon dilatation, a 12-Fr catheter or larger was passed through the obstruction point and placed front and back, which helped with the kinking and herniation, release of intussusception, and improved edema during the indwelling period, which may have helped in treating benign ALO (Fig. 3).

There are some limitations. Ballooning of acute edematous lesions may lead to an exacerbation of the combined inflammation; however, it would not be possible to place large catheter (12-Fr and 14-Fr) without ballooning. For the duration and type of catheter placement, the first patient had a straight catheter for a period of about seven weeks and the second patient had pigtail catheter for 10 days. There are no existing references about the duration and type of catheter placement, so further experiences are required.

In conclusion, percutaneous transhepatic afferent loop balloon dilatation and indwelling catheter placement may be a safe alternative and secure treatment that can be performed when surgery is difficult or when benign ALO persists after surgery.