Summary of the Event: A 57-year-old male with chronic pancreatitis presented with an enlarging pseudocyst which was treated with endoscopic ultrasound (EUS)-guided cystogastrostomy. Three days later, he presented with massive hematemesis, and abdominal computed tomography (CT) revealed hemorrhage within both the pseudocyst and the stomach. Endoscopic evaluation was impossible due to the massive amount of hematemesis. Angiography delineated a small pseudoaneurysm with contrast extravasation involving the branch of the splenic artery. Embolization using n-butyl-2 cyanoacrylate was performed leading to the immediate cessation of bleeding.
Teaching Point: The risk of delayed hemorrhage after EUS-guided cystogastrostomy for a pancreatic pseudocyst should always be kept in mind. Angiography should be considered for the diagnostic and therapeutic purpose when hemostasis is not possible using an endoscope.

Pseudocyst development is a common complication of pancreatitis, with an incidence as high as 20% to 40% in chronic pancreatitis.1 While many pseudocysts are asymptomatic or resolve spontaneously with conservative management, some require treatment.2 Although surgery has been the standard technique for pseudocyst drainage, the use of endoscopic methods is increasing because of the shorter hospital stays, the better physical and mental health of patients and the lower cost with equal efficacy compared with that of surgical treatment.3 Frequently reported complications after endoscopic drainage include secondary infection of the pseudocyst, hemorrhage, development of a pneumoperitoneum, or stent migration, of which the most worrisome is severe hemorrhage which occurs at a rate of 5% to 15%.4 In this manuscript, we present a case of delayed, i.e., more than 24 hours, hemorrhage caused by a splenic artery pseudoaneurysm occurring after endoscopic ultrasound (EUS)-guided cystogastrostomy, which was diagnosed and treated with angiography. The purpose of this manuscript is to underscore the rupture of a pseudoaneurysm as a cause of delayed hemorrhage after endoscopic drainage of a pancreatic pseudocyst and to emphasize the role of angiography for the diagnosis and treatment.

A 57-year-old male with a long history of alcoholism and chronic pancreatitis presented with an enlarging pseudocyst. Abdominal computed tomography (CT) revealed chronic calcifying pancreatitis and a 6.0-cm × 5.4-cm pseudocyst located in the pancreatic tail closely adjacent to the gastric wall (Fig. 1A).

After one month, the patient was admitted for endoscopic retrograde cholangiopancreatography (ERCP) and pseudocyst drainage. EUS (GF-UCD260; Olympus of America, Center Valley, PA, USA) was used to image a pseudocyst containing echogenic debris, approximately 5-cm in length, near the pancreatic tail. The pseudocyst was then punctured and a fistula between the pseudocyst and his stomach was created using a 19-gauge aspiration needle (Cook, Bloomington, IN, USA) after careful examination of the regional vasculature using color Doppler ultrasound. A 0.035-inch guidewire (Radifocus; Terumo, Tokyo, Japan) was then advanced over the needle and coiled within the pseudocyst, followed by deployment of an 8-mm × 2-cm HOT SPAXUS® lumen-apposing metal stent (Taewoong Medical, Goyang, Korea) under fluoroscopic and endoscopic guidance (Fig. 1B, 1C).

Three days later, the patient presented with loss of consciousness for a few seconds followed by massive hematemesis. His systolic blood pressure was measured approximately 70 mmHg, and laboratory tests showed a decreased hemoglobin level, i.e. 12.3 g/L from 15.1 g/L. An abdominal CT scan showed a large hematoma within both the pseudocyst and his stomach (Fig. 2A). Angiography was performed because endoscopic evaluation was impossible due to the massive amount of hematemesis. Celiac angiography delineated a small pseudoaneurysm at the origin of one short gastric artery from the splenic artery (Fig. 2B). The short gastric artery was then selectively catheterized and subsequent angiography demonstrated contrast extravasation into the pseudocyst (Fig. 2C). Embolization was performed using n-butyl-2 cyanoacrylate (NBCA) (Histoacryl; B Braun, Sempach, Switzerland) which was mixed with ethiodized oil (Lipiodol; Andre Guerbet, Aulnay-Sous-Bois, France) at a ratio of 1:3. Subsequent angiography performed after embolization showed disappearance of the pseudoaneurysm without a further bleeding focus (Fig. 2D). 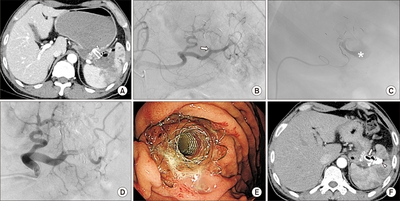 Figure 2. Bleeding complications and interventional management. (A) A contrast-enhanced computed tomography (CT) scan demonstrates the heterogeneous and hyperdense content indicating a hematoma in the pseudocyst and distended stomach without evidence of contrast extravasation or pseudoaneurysm. Geographic hyperdense areas in the spleen suggest splenic ischemia. Note the cystogastrostomy stent in place. (B) Celiac angiography delineates a small pseudoaneurysm (arrow) at the origin of one short gastric artery from the splenic artery. (C) Selective angiography of the culprit, short gastric artery demonstrates contrast extravasation (asterisk) into the pseudocyst. Embolization using n-butyl-2 cyanoacrylate (NBCA) was performed (not shown) (D) Post-embolization angiography shows complete disappearance of the pseudoaneurysm. (E) Follow-up gastroduodenoscopy performed two days after the embolization shows the cystogastrostomy stent in place and no evidence of bleeding. (F) Follow-up CT obtained after one month shows the cystogastrostomy stent (arrow) in place and the decreased size of the NBCA-filled pancreatic pseudocyst (arrowhead).

Gastroduodenoscopy performed two days later showed that the cystogastrostomy stent was in the original place and without active bleeding (Fig. 2E). Thereafter, the patient was discharged in stable condition following one week of hospitalization, and the stent was removed one month later with resolution of the pseudocyst (Fig. 2F).

Pseudocyst development is a common complication of pancreatitis, with an incidence as high as 20% to 40% in chronic pancreatitis patients.1 Indications of treatment for pancreatic pseudocysts include the presence of symptoms, enlargement, or being complicating by infection, bleeding or obstruction of the gastric outlet or the biliary tract.3

Endoscopic drainage is less invasive than surgery and has a shorter post-procedural recovery period and subsequently a shorter hospital stay.3 It is accomplished by creation of a fistula and stent placement between the pseudocyst and the stomach (cystogastrostomy) or between the pseudocyst and the duodenum (cystoduodenostomy).5 Currently, EUS-guided drainage is widely used as a safer method as it identifies interposed blood vessels and thus reduces the risk of bleeding.6,7

Bleeding is a life-threatening complication of endoscopic drainage. It usually occurs either during the procedure or in the early post-procedural period and often arises from cystoenterostomy margins due to a vascular injury which can be controlled by endoscopic coagulation.8 This case underlines the risk of delayed, i.e. more than 24 hours, hemorrhage occurring after EUS-guided cystogastrostomy, which is a rare complication with only a few cases reported.8

Delayed hemorrhage after EUS-guided cystogastrostomy may be a late manifestation of puncture-related arterial injury. In this case, the proximal part of the short gastric artery was seen as pseudoaneurysm, and it is thought to be due to puncture-related injury. Another cause of delayed hemorrhage may be explained as being due to the enzyme contained in the pancreatic pseudocyst. Pancreatic pseudocysts contain a lytic enzyme, such as elastase, which has a lytic effect on the elastic component of vessel walls. These enzymes might cause the development of a pseudoaneurysm in the adjacent arteries.8

Endoscopy is usually the first investigation performed when post-procedural hematemesis occurs. However, contraindication, e.g. unstable vital sign, or failure to arrest hemorrhage endoscopically should be followed up with angiography as soon as possible, especially a patient in critical condition. Although ultrasound, color Doppler, and CT may reveal a fresh clot in the pseudocyst and display the pseudoaneurysm, angiography is the most useful method of investigation as it not only confirms the diagnosis but provides access for transcatheter arterial embolization. The reported success rates of transcatheter arterial embolization of a pseudoaneurysm complicating pancreatitis ranges from 79% to 100%.9

In conclusion, the risk of hemorrhage complicating endoscopic drainage of a pancreatic pseudocyst must be kept in mind even in the late post-procedural period. Angiography should be considered first in considering the diagnostic and therapeutic purpose when hemostasis is impossible or has failed when using an endoscope.