Left-sided portal hypertension following pancreaticoduodenectomy (PD) with portal vein resection and splenic vein ligation may cause ectopic variceal formation, potentially resulting in life-threatening bleeding. We report of a 79-year-old male suffering from severe anemia and melena after PD. Emergency endoscopy and contrast-enhanced computed tomography (CECT) revealed ectopic varices at the anastomosis site of pancreaticojejunostomy. An interventional radiology approach was preferred over surgical and endoscopic treatment because of the poor general condition and altered anatomy. In the first procedure, percutaneous transhepatic retrograde obliteration was performed using the coaxial double balloon-occlusion technique. Although hemostasis was obtained, re-bleeding occurred two months later. CECT revealed the development of another collateral pathway and the recurrence of varices. Insufficient embolization of the afferent vein was considered the cause of recurrence. Therefore, a percutaneous transsplenic approach was used, and complete embolization of varices was achieved. When transhepatic retrograde obliteration is not effective, transsplenic antegrade obliteration can be a useful therapeutic option.

Pancreaticoduodenectomy (PD) with portal vein resection (PVR) has been widely accepted as common practice in cases with tumor invasion of the portal-superior mesenteric vein.1–3 However, it is associated with a localized form of portal hyper tension known as left-sided portal hypertension (LSPH), because of concomitant ligation of the splenic vein (SpV), which is often performed due to technical or oncologic reasons.4–6 A recent systematic review reported that the incidence of LSPH in patients undergoing PD with PVR and SpV ligation is 29.4%.4 LSPH is a potentially severe complication, because it can cause ectopic varices, resulting in massive gastrointestinal bleeding.4,5,7–9

Here, we report a case of variceal hemorrhage induced by LSPH following PD, which recurred after percutaneous transhepatic obliteration, and which was managed by a transsplenic antegrade approach.

The Institutional Review Board of our institute does not require the approval for publication of this retrospective case report.

A 79-year-old male had undergone PD for borderline resectable pancreatic cancer. During PD, PVR with ligation of the SpV was performed due to venous invasion. He was pathologically diagnosed stage III pancreatic cancer and postoperative adjuvant chemotherapy was conducted. Six months after the operation, the patient was admitted to our hospital due to severe anemia (hemoglobin level, 4.0 g/dL) and melena.

Contrast-enhanced computed tomography (CECT) revealed variceal formation at the site of the pancreaticojejunostomy (Fig. 1A, 1B). The afferent feeders originating from the SpV and two main efferent veins draining to the superior mesenteric vein via the jejunal vein were identified (Fig. 1C). The size of the spleen was normal, and no portosystemic shunt was observed. Emergency endoscopy revealed varices with a red spot in the afferent jejunal limb (Fig. 1D, 1E). Bleeding from the varices occurred during endoscopy; however, endoscopy-based hemostasis was not possible due to the surgically altered anatomy and severe adhesion. Therefore, obliteration of the varices was attempted via an interventional radiology (IR) approach. 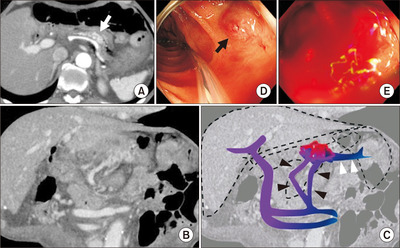 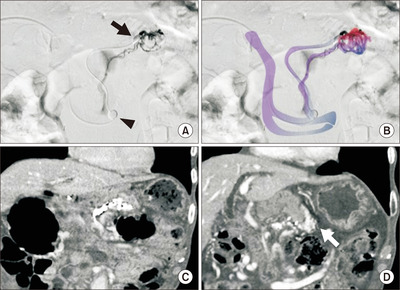 After the procedure, the anemia and melena subsided, and no complications were noted. CECT obtained 10 days after the procedure revealed complete obliteration of the varices (Fig. 2C). However, re-bleeding was observed two months after the first procedure, and variceal recurrence at the pancreaticojejunostomy was confirmed by CECT (Fig. 2D).

As a second intervention, a transsplenic antegrade approach was carried out. A branch of the SpV was punctured using a 21-gauge needle under ultrasonographic guidance (Fig. 3A). A 0.018-inch (0.46 mm) guide wire was advanced into the SpV and upsized to a 0.035-inch (0.89 mm) guide wire, and then a 5-F sheath was inserted into the SpV. A 5.2-F balloon catheter was advanced into the afferent vein, and balloon-occluded transsplenic antegrade venography depicted all the varices from which new efferent drainage route had developed (Fig. 3B). A 2.0-F microcatheter (Carry Gaia; Union T&M, Aichi, Japan) was introduced into the varices, and embolization was performed with NLE (1:2:2 ratio by volume) under flow control by balloon occlusion until all varices were occupied with the mixture. The microballoon was deflated 30 seconds after administration of NLE and it was subsequently withdrawn. The SpV was embolized to the splenic hilum with 0.035-inch (0.89 mm) fibered coils (MReye; Cook Japan, Tokyo, Japan) to prevent variceal recurrence at the site of PD (Fig. 3C). Next, the transsplenic tract was plugged with the NBCA-lipiodol mixture (1:3 ratio by volume) (Fig. 3D). 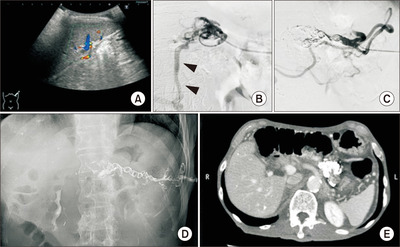 Although ectopic variceal bleeding due to LSPH is very rare, it can be life-threatening, and no standard treatment has been established yet.4,9,10 According to previous studies, it can be managed by surgical, endoscopic, IR, and conservative treatments.4,5 We chose IR treatment as the first therapeutic option because surgical treatment such as splenectomy was considered too invasive, and endoscopic sclerotherapy appeared impossible to perform due to the altered anatomy and severe adhesions. Several studies have indicated the usefulness of PSE and transvenous obliteration in the management of ectopic varices induced by LSPH.9,10 In this case, because active bleeding was observed, transvenous obliteration was preferred over PSE in the interest of direct variceal occlusion rather than indirect flow reduction to achieve an immediate cessation of hemorrhage. The systemic venous approach appeared unsuitable because of the absence of a portosystemic shunt. Therefore, variceal obliteration via the transhepatic portal vein approach was performed in the first IR procedure. Sakamoto et al9 reported successful endovascular treatment for varices located in the afferent jejunal loop, which was the bleeding site involved like this case. They achieved complete variceal embolization using balloon-occluded retrograde transhepatic obliteration, and no re-bleeding was observed over the one-year follow-up period. Meanwhile, in our case, though we embolized the varices in the same way as reported by Sakamoto et al,9 variceal bleeding recurred a few months later. A new collateral pathway had developed after the first IR procedure, because the afferent vein and other possible collateral pathways could not be embolized sufficiently. We used a transsplenic antegrade approach when the re-bleeding was observed. Balloon-occluded antegrade venography from the SpV, which was the afferent vein, visualized all varices as well as the efferent vein and other possible collateral pathways, which allowed complete variceal embolization, resulting in successful hemostasis. However, this approach involves a risk of bleeding from the splenic puncture site.11 To avoid massive peritoneal hemorrhage, the puncture site should be confined within the splenic parenchyma and should be plugged when removing the catheter sheath.11

We used NLE as the embolic material. NLE is a liquid embolic material, which forms large droplets without adhesion to the balloon catheter in the blood.12,13 Unlike ethanolamine oleate iopamidol (EOI), it does not cause severe hemolytic reactions; nor does it require overnight catheterization.14,15 Moreover, unlike the mixture of NBCA and lipiodol, it does not require rapid injection nor rapid removal of the catheter.16 NLE might be a suitable embolic material for patients who need embolization under balloon-occlusion and who cannot tolerate the drastic hemolytic reactions typically induced by EOI because of poor general condition.

In conclusion, we have reported a case of ectopic variceal hemorrhage induced by LSPH following PD, which was treated by obliteration via the transhepatic retrograde and the transsplenic antegrade approach. When the transhepatic retrograde obliteration does not yield a favorable result, the transsplenic antegrade approach can be a useful alternative therapeutic option.